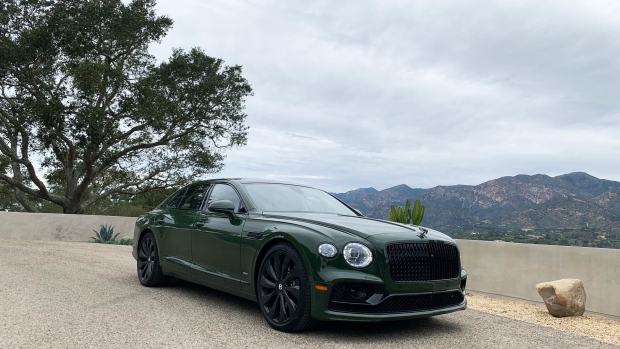 (Bloomberg) -- The 2022 Bentley Flying Spur Hybrid enters the market in the second quarter as Bentley’s second plug-in hybrid, after the Bentayga Hybrid. It’s the company’s next step toward its goal to sell only electric vehicles by 2030.

Set on the same platform as the Porsche Panamera and driven by a V6 engine and an electric motor and 18.9kWh battery system, the Flying Spur Hybrid wrings every last mile from this combo to achieve a total driving range in excess of 450 miles. (Electric-only range lasts 25 miles.)

Cruising range and luxury bounty are this car’s highest virtues. Since its inception in 2005, and spanning back to its S1 and S2 Continental Flying Spur predecessors in the 1950s, the Flying Spur has been Bentley’s offering best suited for long drives to beautiful locales—or for running a day’s worth of errands—in supreme comfort. The driving range on this Flying Spur exceeds by at least 50 miles those of its V8 and W12 siblings.

It’s certainly comfortable. The cabin is lined in decadent leathers, British wool tweed, and open-pore koa veneer wood (or fiddleback or walnut, as desired), and it offers a drive quality that lulls one into blissful gluttonous stupor like red wine after a feast. If there is to be any absolution for the car’s anticipated, pain-inducing price tag, pleasures like those will surely expedite forgiveness—or at least justify the expense. (Bentley has not yet released pricing for the Flying Spur Hybrid, although consumers can expect it to fall in the range of the existing $204,500 V8 and $231,200 W12 variants.)

After driving the Flying Spur Hybrid nearly 200 miles recently in the hills around Santa Barbara, Calif., I’m not in such a benevolent mood.

Don’t get me wrong. I’m an absolute evangelist when it comes to some Bentleys. The Bentley Continental GT is among the five best cars money can buy, full stop. The Flying Spur with the V8 engine “shone most significantly at speeds above 70 mph, flying like a Concord jet when jumping between higher gears,” as I wrote when I drove it last year. The sheer grandiosity of the options on the hybrid version boggles the mind: Some 56 billion combinations of leathers, steel, wood, wheels, paint, stitching, treadplates and the like are possible, a spokesman says.

I’m preaching to the choir, I know. Buyers with the means to own a Bentley agree. Last year, Bentley Motors Ltd. delivered 14,659 cars globally in 2021, up 31% over the previous record year, 2020. By July 2020, it had already surpassed full-year profits from any previous year. The prince of Crewe, England, has been proving its mettle for years and is set to continue its reign for the foreseeable future.

However, the Flying Spur Hybrid is not the best Bentley you can buy. It’s not even the best Flying Spur you can buy. This Spur lacks real merit; virtue-signaling “hybrid” badges don’t get you far in heaven, though they may get you into London once those internal combustion engine  restrictions start.

Working my way up country roads lined in orange orchards and olive trees, the Spur Hybrid felt heavy as it lolled from one side to the other around tight turns. It felt heavy because it is heavy: some 6,680 pounds. At 17.4 feet long, it's roughly an inch longer than its predecessor, with a wheelbase 5.11 inches longer.

Admittedly, curvy roads aren’t the best playground for sedans the size of whales. But even driving on straightaways down Interstate Highway 405, where it should have excelled, the Spur felt gutless compared other vehicles of its caliber. Despite the eight-speed transmission that cut through gears like a hot knife through butter, it just didn’t put the power down when I pressed the gas and asked for more—and that didn’t change significantly when I moved the Spur from Comfort to Sport mode.

I blame that twin-turbocharged V6, which Bentley Engineering Project Leader Steve Jones explains came part-and-parcel with that borrowed V6 platform. At 536 bhp, the Hybrid nearly matches the 542 bhp of the Spur V8, but it lacks the thrust and the feeling of grand aggression you want to feel in such a vehicle. The Flying Spur Hybrid will get to 60 mph in 4.1 seconds, a hair slower than the Spur V8, significantly slower than the 3.8 seconds of the Flying Spur W12, and about the same as the faster variants of the all-electric Mercedes-Benz EQS. Top speed is 177 mph, noticeably slower than the 198 mph of the V8 Spur and the 200 mph-plus heights of the Flying Spur W12 and Continental GT. (If you perceive a lot of “slower than” phrasing in this paragraph, it’s real.)

This is not the lethally fast M15 agent in a Saville Row suit that I’d want for such a high price tag. It’s more like a nice-enough guy who talks too much about yoga.

That may not deter you. Car buying is emotional, not rational. If, as you read this, you already had your heart set on buying a Bentley, you probably still want a Bentley—even (or especially, if you are into the appearance of eco-minded piety) a hybrid Bentley. Bentley’s boast that one in five Bentaygas sold last year globally were hybrids did not go far enough to convince me that American consumers are particularly desperate for them.

Here is a holy host of redeeming qualities you can repeat to your friends and yourself to help justify your cause. The car itself is truly handsome—more handsome than previous generations, with its new, unique 21-inch 10-twin-spoke wheels (22-inch Mulliners are optional), signature color palettes, and optional pale metallic accents across its front. The knurled wood, diamond-stitched seats, mood lighting, gloss black grille, and matrix lights make the Spur look fresh and cool, which is quite a feat for an enormous sedan with roots dating back 70 years. Some may even prefer the charming curves of its face more than the staunch upright grille of its Rolls-Royce counterpart.

The interior lacks for nothing, compared to any other Bentley vehicles, which all contain the best interior craftsmanship in today’s market. I find Bentley’s massaging seats, with their dozens of settings, the best I’ve felt in a vehicle; the vanity lighting in the back seat alone tops any lighting I ever achieved in my apartment in New York. The 12.3 inch floating touchscreen, USB ports and inductive charging, and vast driver-assistance systems proved unobtrusive but helpful when needed, like a good butler. I love the fact that Bentley’s “remote services” through its app can let you locate the car and automatically warm it or cool it before you arrive. What’s more, the EV boasts a 50% reduction in decibel cabin noise compared to the V8 at speed, thanks to its silent hybrid systems.

Three modes for energy use allow a driver to choose to use only the electric battery, a mix of electric and conventional power, or only gas while holding the electric charge in reserve. The battery charges in 2 ½ hours, and a Bentley-branded at-home charging box is a no-cost option for owners who want one.

During my drive in the Flying Spur Hybrid, I preferred the energy mode that combined electric and gasoline power for driving; it extends the car’s range farthest. I wasn’t yet sold on the Flying Spur Hybrid … but I wasn’t eager to leave its cosseted confines, either. Maybe a few more hours worshiping at the altar of British automaking would do the trick.