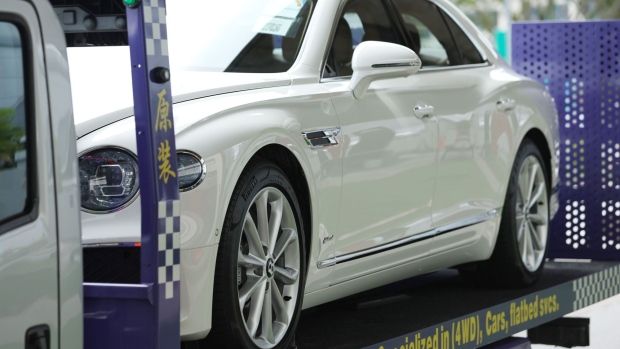 A Bentley Motors Ltd. vehicle on a flatbed truck outside a dealership in Singapore, on Wednesday, Nov. 2, 2022. Sales of luxury cars are humming, with some 87 Bentleys registered this year in Singapore, up 26% compared with all of 2019. Photographer: Lionel Ng/Bloomberg , Bloomberg

(Bloomberg) -- Bentley Motors Ltd. is having a record year and seeing growth around the world, with one big exception: China.

Orders in the world’s largest auto market have dropped from as many as 800 a month when initial Covid restrictions were first lifted in 2020 to 150 to 200 units a month currently, the head of the Volkswagen AG-owned manufacturer said Wednesday.

“In the last four or five months, the order intake rate is now about the same as it was before Covid,” Chief Executive Officer Adrian Hallmark told reporters at Bentley’s headquarters in Crewe, England. “It’s not a disaster, but if I look at the rest of the world — the US, the UK, Europe — they’re 20-plus percent up on the previous year.”

The comments point to the country’s stringent Covid Zero policy hitting even its most well-heeled consumers as economic growth in the country slows to near a four-decade low. Hallmark said it’s been difficult to get a full picture of what’s happening on the ground because even Bentley’s local employees are unable to get out much.

“Customers are just not shopping while in lockdown,” he said.

Bentley plans to offer only plug-in hybrid and electric cars by 2026 and switch its entire lineup to fully battery-powered vehicles by the end of the decade. The brand known for massive 12-cylinder engines will leverage technology investments being made by parent VW, which is looking to challenge Tesla Inc. as the dominant EV maker.