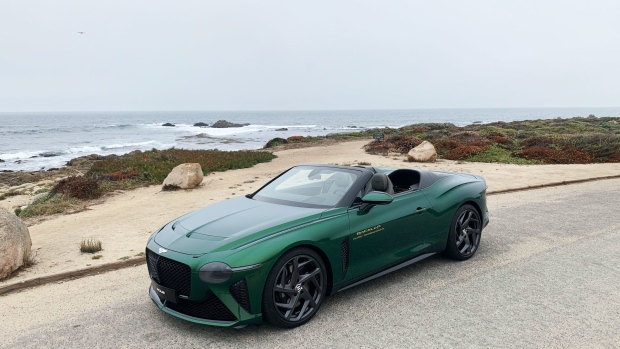 “This is unprecedented levels for us,” Rolls-Royce Chief Executive Officer Torsten Müller-Ötvös said during an interview on Bloomberg TV. “We have seen growth in all markets worldwide. For the very first time in my 10 years here, I have seen not a single market fading. Every market is very strong and going. It’s unbelievable.”

The gains confirm what already looked to be a banner year for ultra luxury automakers in general. By July, Bentley had surpassed full-year profits from any previous year. The Crewe, England-based company scored its biggest gains in 2021 in China, its second biggest market, after the U.S. China posted a 40% sales increase year-over-year, edging the 39% increase for the Americas region. All told, the Americas and China contributed 56% of Bentley’s global sales.

“When the economy is going well, with a high level of securities and money in the market, the luxury brands benefit from it,” says Bentley North America CEO Christoph Georges during a phone interview. “So we had some tailwinds from the market.”

The results demonstrated a striking improvement, particularly on the part of Rolls-Royce, which had delivered just 3,750 automobiles in 2020, down 26% year-over-year and  far worse than its peers. (Bentley’s sales were up 2% in 2020.) Timing related to the transition from the first-generation Ghost, which had been discontinued in 2019, to the second-generation Ghost contributed to the decline, Martin Fritsches, Rolls-Royce Motor Cars Americas president and CEO, said at the time.

In 2021, Rolls-Royce mounted a turnaround with record sales in the U.S., Canada, and China, Müller-Ötvös said, with demand surging most for the new Ghost sedan and Cullinan SUV. Bespoke commissions are also at record levels, he confirmed, with “multiple” models approaching seven figures in cost. The average value on Ghost and Cullinan orders for 2021 was more than $400,000, according to a spokesperson, with an order list that extends nearly a year; average Phantom values exceeded $600,000.

“If you order a Rolls-Royce today, you won’t take delivery until next year,” Müller-Ötvös said. “That is what I call quite a healthy order book and what is a good situation for us.”

Neither automaker expressed particular issues with the supply chain delays and computer chip shortages that have plagued other automakers.

“I’m very glad that we are part of the BMW Group—we had preferential delivery for semiconductors last year. and whatever we wanted to get, we got,” Müller-Ötvös said. “That enabled us to build all the cars on order for clients; we hadn’t lost a single car last year, and I foresee the same for this year.”

Both Bentley and Rolls-Royce are working to produce their first electric vehicles as many other luxury brands, including Audi, BMW, Porsche, and Mercedes-Benz, are rolling out second, even third, fully electric vehicles. Bentley’s Georges says he isn’t much bothered about being the first, second, or third automaker to go all-electric, although “you don’t want to be the last one.”

The company currently makes two hybrids, the Bentayga Hybrid and the Flying Spur Hybrid. “What you want is to use the technology when the technology is good enough to satisfy your own customer requirements,” says Georges. “You need to be able to enjoy your Bentley without the anxiety of having enough range to end your journey.”

Bentley has said it will offer full electrification across its lineup by 2030. It debuted the EXP 100 GT electric concept in 2019; a fully electric Bentley will appear in three or four years, Georges says, declining to specify whether it would be a coupe, sedan, or SUV.

“With the further developments we are working on the technology side, we believe 2025-26 is when the technology will be adequate and align to our customer requirements,” Georges says. “That is the most important thing.”

For its part, Rolls-Royce announced in September that it will stop making combustion engines by 2030. Its first all-electric motor car, the Spectre, will arrive in fourth-quarter 2023, Müller-Ötvös said, with performance details to be released later this year.

“I drove it already,” he said. “Rest assured it will be a magnificent Rolls-Royce.”