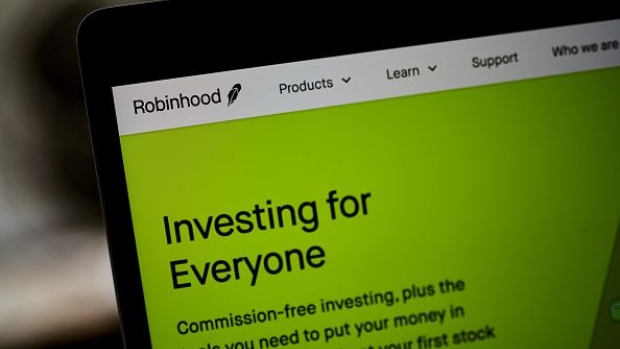 The Robinhood website home screen on a laptop computer arranged in the Brooklyn borough of New York, U.S., on Saturday, Dec. 19, 2020. Robinhood Markets will pay $65 million to settle allegations that it failed to properly inform clients it sold their stock orders to high-frequency traders and other firms, putting a major compliance headache behind the brokerage even as new ones emerge. , Photographer: Bloomberg/Bloomberg

“We think there’s a huge upswing and we wanted to accelerate our growth,” Raznick said in a CNBC interview Monday, the same day Beringer announced the investment. “We’re seeing a lot of holes in the market that we think we can uniquely speak to when it comes to an active trader trying to hear what is going on in the market.”

The Toronto-based investor didn’t disclose the exact size of its stake, but Raznick said the deal gives his firm a $300 million enterprise value. Raznick said Benzinga, which he co-founded in 2010, attracts roughly 35 million readers monthly and emphasized that he thinks the current retail investing craze still has room to run.

“There’s over 100 million investors these days, but we’re still at pre-pandemic lows where only 56% of households are actually invested in the market,” Raznick said. “We think it’s still the second inning in this game.”