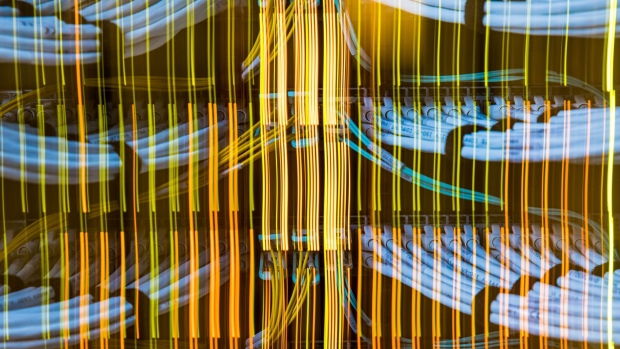 Light trails from network switches illuminate fiber optic cables, center, and copper Ethernet cables inside a communications room at an office in London, U.K., on Monday, May 21, 2018. The Department of Culture, Media and Sport will work with the Home Office to publish a white paper later this year setting out legislation, according to a statement, which will also seek to force tech giants to reveal how they target abusive and illegal online material posted by users. Photographer: Bloomberg/Bloomberg , Bloomberg via Getty Images

Berkshire Hathaway Inc. is buying into a software company’s initial public offering in the latest expansion of Warren Buffett’s playbook.

Berkshire and Salesforce Ventures, an arm of Salesforce.com Inc., will each buy US$250 million of shares of Snowflake Inc. at its IPO price, according to a filing Tuesday. Berkshire has also agreed to buy 4 million shares in a secondary transaction, according to the filing.

Buffett for decades shied away from technology-company investments, preferring industries he knew better, but has relaxed that stance in recent years. He’s also been more open to share buybacks and foreign investments as he seeks ways to deploy a cash pile that ended June at almost US$150 billion.

A tech IPO isn’t totally unprecedented for Berkshire. In 2018, the company invested in the offering of StoneCo Ltd., a fintech that operates in Brazil. Those shares have more than doubled from the offering price.