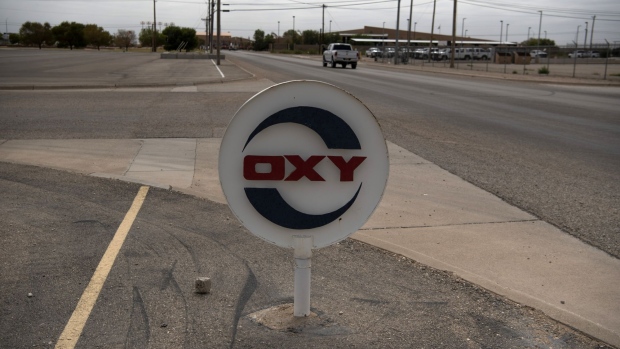 Signage is displayed outside of Occidental Petroleum Corp. headquarters in Carlsbad, New Mexico, U.S., on Friday, Sept. 11, 2020. With the U.S. oil industry reeling from the collapse in demand this year, the New Mexico shale patch has emerged as the go-to spot for drillers desperate to squeeze as much crude from the ground without bleeding cash. There’s just one problem: Joe Biden wants to ban new fracking there. Photographer: Callaghan O'Hare/Bloomberg , Bloomberg

(Bloomberg) -- Berkshire Hathaway Inc. snapped up about 5.9 million more shares of Occidental Petroleum Corp., as the conglomerate run by billionaire Warren Buffett piles deeper into its bet on the oil giant.

The shares were bought May 2 and May 3 at prices ranging from about $56 to $58.37 apiece, according to a filing late Wednesday. Omaha, Nebraska-based Berkshire had previously built up a roughly 14.6% holding of Occidental’s common stock, in addition to the preferred stake that it acquired in 2019 when the oil company was putting together its deal for Anadarko Petroleum Corp.

Occidental, which was the best-performing stock in the S&P 500 during the first quarter, has seen its shares benefit from Buffett’s purchases and higher oil prices driven by the war in Ukraine. Its stock gained 3.9% Wednesday in regular New York trading to $61.57, and has more than doubled this year.