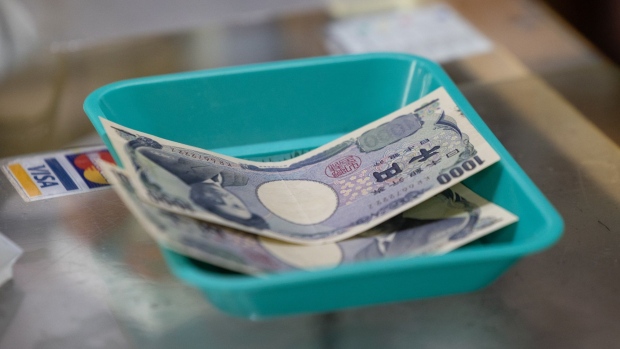 1,000 yen banknotes at a store in Hakone, Kanagawa Prefecture, Japan, on Tuesday, Nov. 22, 2022. The world's central banks must keep raising interest rates to fight soaring and pervasive inflation, even as the global economy sinks into a significant slowdown, the OECD said. Photographer: SeongJoon Cho/Bloomberg , Bloomberg

(Bloomberg) -- Investors are being sounded out by Warren Buffett’s Berkshire Hathaway Inc. about the sale of a potential multi-part yen bond offering, according to people with direct knowledge of the matter.

The deal may include notes as long as 30 years, according to the people, who asked not to be identified because they’re not authorized to speak about it.

With the BOJ maintaining its negative-interest policy, all-in borrowing costs for companies remain low in yen, even if they have risen. That’s helped to attract more issuers to the yen credit market.

The average yield on yen investment-grade corporate bonds is about 0.67% compared with 5.36% for US peers, Bloomberg-compiled data show.

If Berkshire’s offering proceeds, it would be the firm’s second in the Japanese currency this year and add to a string of recent yen note deals by overseas issuers, according to Bloomberg-compiled data.

Berkshire sold a five-year bond at a spread of 17 basis points in January. For the current offering, a spread of about 60 basis points is under consideration for a note of similar tenor, according to the people.

Berkshire has issued yen bonds every year since 2019, when it priced one of the biggest yen offerings ever by an overseas firm. It last sold such debt in January.

The firm hired BofA Securities Inc. and Mizuho Securities Co. for a potential offering of SEC-registered fixed senior unsecured notes, according to Mizuho earlier this week.