What Does the Coup in Myanmar Mean for China?

Warren Buffett made no splashy deals in 2020, and he didn’t weigh in on some of the year’s most contentious topics in his much-anticipated annual letter. Behind the scenes, the 90-year old billionaire was hardly inactive.

Berkshire Hathaway Inc. was firing up another engine: stocks -- both buying its own and trading others. The conglomerate snapped up US$24.7 billion of Berkshire shares last year, a stark record for the business sitting atop a US$138 billion cash pile. It also almost doubled the volume of buying and selling of other stocks compared to 2019.

The moves signal a carefully forged path in markets sent convulsing by the pandemic and then lifted by stimulus that’s paved the way for heavy retail trading and an unprecedented SPAC boom. And Buffett is sticking close to home -- ultimately becoming a net seller of shares in other companies for the first time since 2016, while his prolific repurchases of Berkshire stock continued into this year with at least US$4.2 billion of buybacks through mid-February, according to a regulatory filing Saturday.

“Last year we demonstrated our enthusiasm for Berkshire’s spread of properties by repurchasing the equivalent of 80,998 ‘A’ shares,” Buffett said in the letter released Saturday. “That action increased your ownership in all of Berkshire’s businesses by 5.2 per cent without requiring you to so much as touch your wallet.”

Buffett spent a sizable portion of Saturday’s letter delving into buybacks, a substantial shift for an investor who previously had largely shunned the practice and instead favored purchasing big businesses or stocks of other companies. He loosened the buyback policy in 2018 as Berkshire’s cash pile kept reaching new heights. And Berkshire stock, which has underperformed the broader market in recent years, continued that trend last year with shares just gaining 2.4 per cent compared to the 16 per cent rally in the S&P 500 Index. 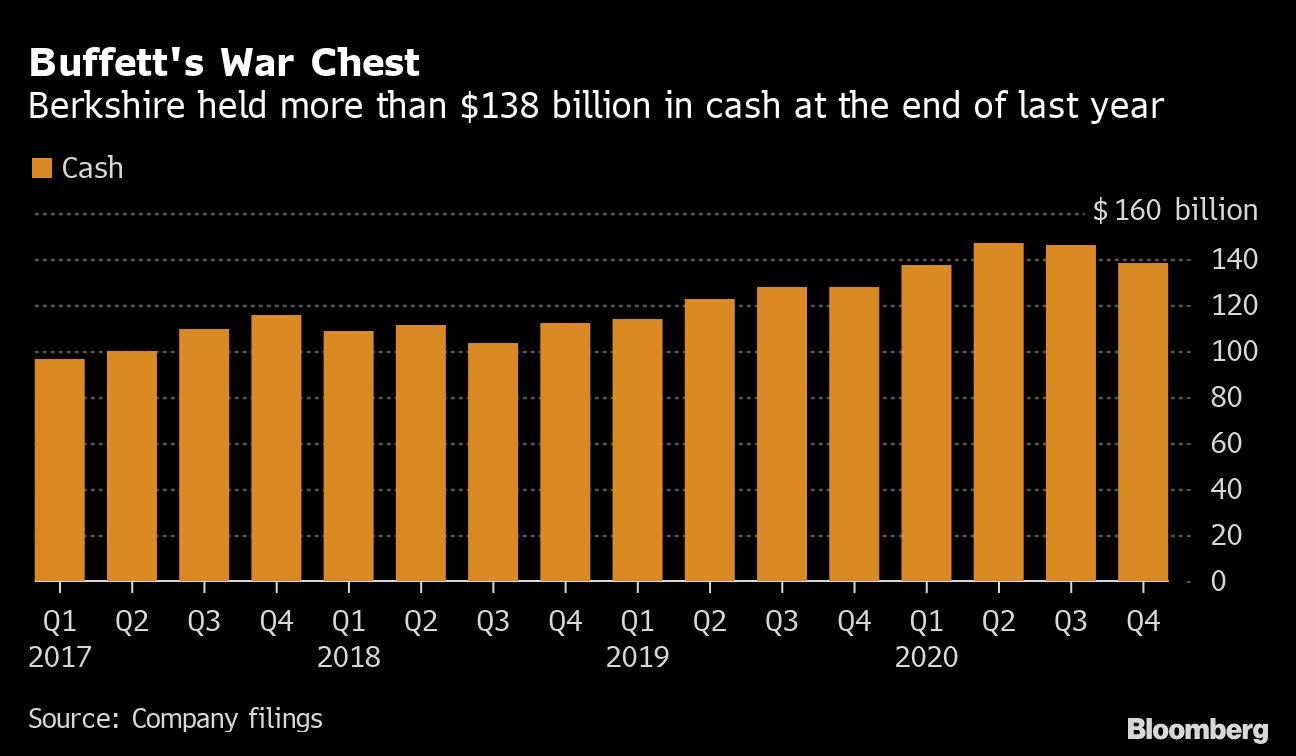 Buffett had long been careful with buybacks, a trait that harkens back to his days running a partnership. In his letter released in 2019 after the buyback change, he made it clear that he wants investors to be fully informed about the company before they decide to sell their shares back to the firm.

He spent his recent letter acknowledging that there were investors, including index funds, professional managers and individuals, who were required to hold some Berkshire shares or would be likely to come and go based on their investing judgment. He’d still stick by the investors who want to invest for the long term, he added.

“Charlie and I would be less than human if we did not feel a special kinship with our fifth bucket: the million-plus individual investors who simply trust us to represent their interests, whatever the future may bring,” Buffett said in his letter released Saturday, referring to long-time business partner, Charlie Munger. “They have joined us with no intent to leave, adopting a mindset similar to that held by our original partners.”

Berkshire still has more than US$138 billion in cash to deploy. A portion of the never-ending cash flow will be sucked up by two of its businesses, the railroad and energy operations, and Buffett said the incremental investment will probably generate “appropriate” returns. Railroad BNSF has invested US$41 billion in fixed assets, and has paid US$41.8 billion in dividends to the conglomerate since its purchase in 2010, Buffett said in his letter.

While the attractiveness of share buybacks might come or go based on the market’s price for Berkshire, the conglomerate still has those two large operations that continuously help reinvest funds, according to shareholder Thomas Russo. That, Russo argues, helps ease the pressure on Berkshire to do an “elephant-sized acquisition” to generate more returns.

“He doesn’t really have to find the elephant because he has two elephants already corralled that need to be fed,” said Russo, who oversees a portfolio including Berkshire at investment adviser Gardner Russo & Gardner. “One of them is Burlington Northern and one of them is Berkshire Hathaway Energy. He can deploy tens of billions of dollars on an ongoing basis, bringing both up to standard,” and then still have funds to deploy in an acquisition.

One of Berkshire’s top three most valuable assets these days is actually a US$120 billion holding of Apple Inc. shares, an investment he likened in importance to the railroad. Berkshire has ended up with an even larger portion of the company’s shares thanks in part to Apple’s own appetite for buybacks, Buffett acknowledged in the letter.

“He’s redefined what an elephant can be,” said James Armstrong, who manages assets including Berkshire shares as president of Henry H. Armstrong Associates. “An elephant can be thought of as a 5.4 per cent interest in Apple.”

Some of Berkshire’s major tweaks to its US$281 billion stock portfolio last year were done to reposition its holdings. Throughout 2020, Buffett’s company cut its holdings in banks, insurance and finance firms -- an exposure that constituted more than 41 per cent of the portfolio at the end of 2019 -- to just 24 per cent of the portfolio by the end of last year. He also dumped his airline stocks earlier in the pandemic.

The company did find stocks to buy last year, including two large stakes in Chevron Corp. and Verizon Communications Inc., plus some purchases of pharmaceutical companies. Berkshire also bought US$6 billion worth of stock in five of Japan’s biggest trading companies.

“He’s been a net seller, however, more recently it seems like he’s identified some opportunities, buying blocks of Japanese industrial stocks” and some health care stocks, Jim Shanahan, an analyst at Edward D. Jones & Co., said in an interview. “He is finding some value given all the limitations. He can’t put a substantial amount of capital to work into any individual stock unless it’s a large one. But being willing to consider investments in a basket of similar companies creates a little bit more opportunity for them too.”

Buffett made little mention in this year’s letter about one of the looming questions over the conglomerate: Succession. The investor, who’s received his coronavirus vaccine, proved he’s still willing to travel by announcing he’ll head to Los Angeles to film this year’s annual meeting alongside Munger, 97, who wasn’t able to make it to last year’s event in Omaha, Nebraska.

“This year our meeting will be held in Los Angeles . . . and Charlie will be on stage with me offering answers and observations throughout the 3 1/2-hour question period,” Buffett said in the letter. “I missed him last year and, more important, you clearly missed him.”