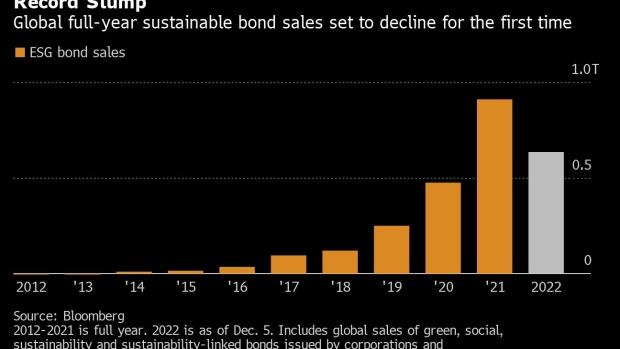 (Bloomberg) -- Warren Buffett’s Berkshire Hathaway Inc. has published a document explaining how it uses the proceeds of green bond sales after having issued the bonds since 2013, a sign that US sellers of the debt are embracing European standards, according to Barclays Plc.

Berkshire, through its subsidiaries, has raised nearly $8 billion in green bonds globally since it started selling the bonds, according to data compiled by Bloomberg. That makes it the fifth-biggest corporate issuer of green bonds in the Bloomberg Global Aggregate Index, excluding government issuers, the data show.

But until last month, the company had not yet produced a green bond framework or obtained a second-party opinion, away from its UK subsidiary Northern Powergrid, Barclays analysts led by Srinjoy Banerjee wrote in a report on Thursday.

More US companies are catching up with European standards of issuing green bonds, where potential issuers put together a framework outlining how the proceeds will be used and the impact the bond will have in years to come, wrote the analysts. Providing third-party verification that proceeds from the debt sales are actually destined for environmentally friendly projects is also becoming a norm in the US. European Union’s upcoming green bond standards will make external verification obligatory.

“It is now becoming rare to find issuers without these documents,” wrote the analysts. Not having them previously “put Berkshire Hathaway Energy behind the rest of the market, potentially presenting problems for investors who have created internal assessments to determine the quality of bonds, and who often see it as a red flag when these documents are missing.”

A representative for Berkshire didn’t immediately respond to requests for comment.

ESG has this year become the subject of intense debate and investors are scrutinizing bonds and loans that claim to benefit the environment and society than ever before. Green bonds, whose proceeds are channeled into environmental projects, still form the largest ESG debt market, though there’s now a wide array of labels including social and sustainability-linked debt. Global annual sales of the bonds are on course to fall for the first time ever in what was expected to be another record year for sales.

Berkshire Hathaway Energy published its first green bond framework last month when it raised $1.1 billion in a rare 31-year green bond through its subsidiary PacifiCorp, an electric power company. While the documents will support demand from ESG-focused investors, there’s less clarity on how the proceeds will be used, said the analysts. A representative for PacifiCorp declined to comment.

When the power company raised $1 billion in 2021, it detailed explicitly in bond documents three wind projects as the beneficiaries of the proceeds. The use-of-proceeds section in the latest documents shows less information on the precise intended allocation of the proceeds, according to Barclays.

“While this new green bond may satisfy investors’ desire to see frameworks and SPOs associated with new offerings, in this instance they are seeing less transparency at the pre-issuance stage on the allocation of proceeds, and will instead need to wait for post-issuance reporting to be released to see detailed allocation information,” wrote the analysts.

--With assistance from Daniel Covello, Andrea Niper and Greg Ritchie.