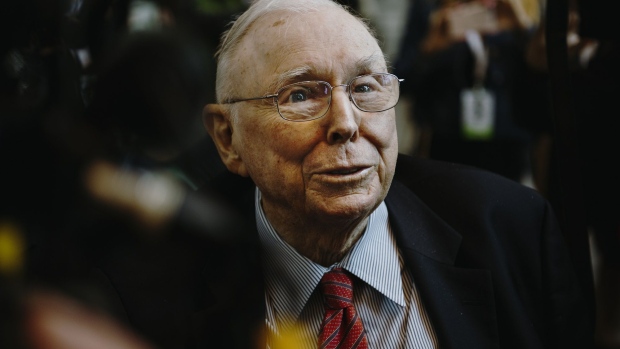 Charlie Munger, vice chairman of Berkshire Hathaway Inc., speaks to members of the media during a shareholders shopping day ahead of the Berkshire Hathaway annual meeting in Omaha, Nebraska, U.S., on Friday, May 3, 2019. Buffett's Berkshire Hathaway agreed earlier this week to make the investment in Occidental to help the oil producer with its $38 billion bid for Anadarko Petroleum Corp. , Bloomberg

Berkshire Hathaway Inc. Vice Chairman Charlie Munger said he expects the COVID-19 pandemic to shrink to insignificance in about a year as the vaccines are widely distributed.

“It’s amazing, I watched the polio get totally killed by the vaccinations,” Munger, 96, said Monday at a California Institute of Technology event held online. “They’ll spread these vaccines over the world so fast, it’ll make your head spin.”

Munger, the longtime business partner of Warren Buffett, spoke just hours after some of the first vaccine shots were delivered in the U.S. His Berkshire Hathaway has been hit by the ripple effects of the pandemic, with a large aerospace-parts maker taking a roughly $10 billion impairment charge because of the virus’s impact on air travel.

He argued Monday that retailers, which are under heightened pressure during the pandemic, were already in a tough situation because of the growth of e-commerce.

“Certainly it’s been a very difficult place to make money because of what the internet has done,” Munger said.

Munger, known for his investing prowess, said he expects equity-market returns to be lower in the next 10 years compared with the previous decade.

“The frenzy is so great and the systems of management, the reward systems, are so foolish,” Munger said.

He also urged caution with the levels of quantitative easing and large government deficits seen in recent years.

“We’re in very uncharted waters,” Munger said Monday about QE and fiscal deficits. “Nobody has gotten by with the kind of money printing we’re doing now for a very extended period without some trouble and I think we’re very near the edge of playing with fire.”