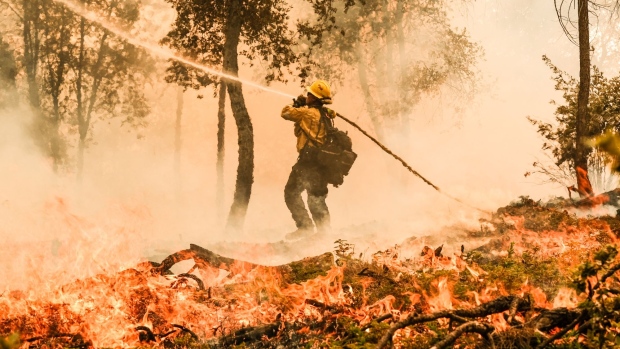 A firefighter works to control a backfire operation conducted to slow the advancement on a hillside during the Oak Fire in Mariposa County, California, US, on Sunday, July 24, 2022. A fast-moving wildfire near Yosemite National Park exploded in size Saturday into one of California's largest wildfires of the year, prompting evacuation orders for thousands of people and shutting off power to more than 2,000 homes and businesses. Photographer: David Odisho/Bloomberg , Bloomberg

(Bloomberg) -- A Berkshire Hathaway Inc. unit was sued for allegedly causing California’s largest wildfire of the year, which killed four people and destroyed almost 200 structures near the Oregon border.

The complaint against PacifiCorp, a power utility based in Portland, Oregon, was filed in California state court in Sacramento, according to a statement by Singleton Schreiber, a plaintiffs law firm. The filing couldn’t immediately be verified.

The suit was filed on behalf of hundreds of people who own property or lived in Siskiyou County whose homes, businesses and loved ones were lost in the fire, according to the statement.

“It was PacifiCorp’s responsibility to manage these utility lines, easements and other right of way issues,” according to the statement. “PacifiCorp is accused of completely failing in its obligation to maintain its equipment.”

The McKinney Fire has burned more than 60,000 acres, killed four people and destroyed 185 structures, according to the California Department of Forestry and Fire Protection, or CalFire.

Tom Gauntt, a spokesman for PacifiCorp, said the company declined to comment.