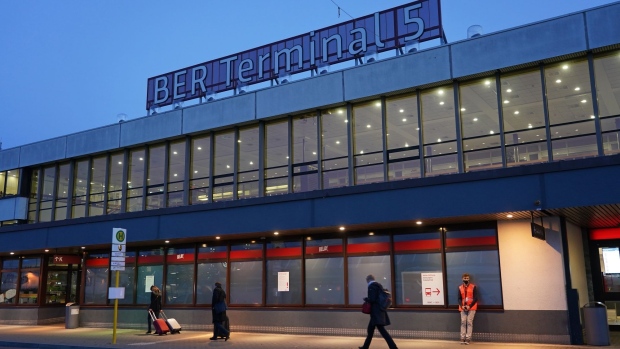 SCHOENEFELD, GERMANY - OCTOBER 25: People walk in front of the main terminal of former Berlin Schoenefeld Airport on the day of its inauguration as Terminal 5 of the new Berlin Brandenburg Airport on October 25, 2020 in Schoenefeld, Germany. Terminal 1 of the new airport is scheduled to begin operation on October 31 and will serve both the city of Berlin and the surrounding region. (Photo by Sean Gallup/Getty Images) , Photographer: Sean Gallup/Getty Images Europe

“Several people” were on the airfield as of 5.35 p.m. local time, Berlin Brandenburg Airport said on its official Twitter account. In an update, the airport said flights had resumed but with delays.

“While some of them are glued to the asphalt, others are riding bicycles across the maneuvering area, bringing air traffic to a standstill,” the group said on its website. “Shortly before entering the airport premises, they informed the police of their plans via an emergency call.”

Letzte Generation, or Last Generation in English, has conducted a series of protests in recent days including at a symphony concert in Hamburg, where according to media reports activists glued themselves to the conductor’s podium.