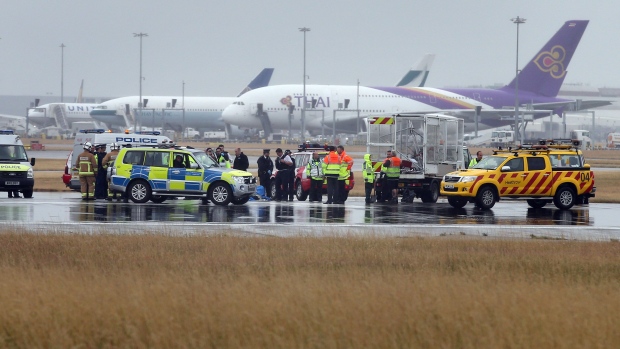 (Bloomberg) -- Shuttering Berlin airport for more than two hours and upsetting the travel plans of thousands of passengers proved little more challenging than a walk in the park for four climate protesters.

Video footage of the runway invasion Thursday shows two of them calmly pushing a bicycle along a country path before slipping through a hole in the perimeter fence as a third holds back the newly cut wire and the fourth films.

Clad in high-visibility jackets, they then stroll across the grass before gluing themselves to taxiways and cycling around the apron after making an emergency call to inform police of their presence.

The ease of the incursion demonstrates the vulnerability of even some of the world’s busiest airports as groups pledged to fight global warming single out aviation as a prime target for disruption as it struggles to cut carbon emissions. Perimeters that stretch for many miles -- 13 in the case of London Heathrow, Europe’s busiest hub -- are tough to monitor and police, though security measures are more formidable in some countries than others.

“It’s absolutely outrageous and there should be a serious investigation,” Anthony Glees, emeritus professor at the University of Buckingham in England and an expert in airport security, said of the events at Berlin Brandenburg. “Getting anywhere near the runway is an absolute no-no.”

While the maintenance of the Berlin fence is the responsibility of the airport company, stopping unauthorized people from crossing the perimeter is a task for Germany’s federal police, who have previously warned that the split creates security vulnerabilities and sought to take on increased powers.

Unlike in the UK and France, monitoring of extremist groups that could attack or disrupt major infrastructure is also performed by a patchwork of regional security agencies, with Berlin’s having just 257 staff.

Data and personal privacy concerns mean there are also restrictions on closed-circuit television in public places, with cameras generally outlawed away from locations such as train stations and airport terminals themselves. Routes approaching Berlin Brandenburg, located on the southern fringes of the German capital, may therefore have gone unmonitored.

“There are multiple cultural problems with the delivery of day to day security in Germany,” Glees said. “Germans don’t like intelligence-led activity because it reminds them of the Third-Reich or the Stasi.”

Parts of Frankfurt airport were evacuated for several hours in 2018 after a family was allowed to pass through security despite testing positive for traces of explosives, before being located and cleared following further checks. Hundreds of flights in and out of Munich were canceled in July of the same year after a woman slipped past a checkpoint.

Even at Heathrow, however, activists from Plane Stupid managed to cut through the fence and close a runway in 2015. That’s at a hub with heightened security in place for decades after IRA terrorists fired mortars in 1994 and intelligence agencies warned of planned al-Qaeda anti-aircraft missile strikes in 2003.

Recent actions in the UK have focused on more easily accessible transport links, with Extinction Rebellion activists scaling the outside of trains in 2019, leading to angry clashes with commuters, and Just Stop Oil closing sections of the M25 motorway around London in a series of sit-down protests this month.

Flying, though, is the most CO2-intensive form of travel, and while it accounts for around 2% of global emissions at present that’s likely to reach 22% by 2050, according to a European study, as air-passenger numbers increase and other industries make faster progress toward decarbonization.

Private-jet terminals have become a particular focus for anger over aviation emissions, with Amsterdam Schiphol’s VIP facility targeted by 300 Greenpeace and ER activists earlier this month.

Some used ladders to scale a fence and others rode bicycles before chaining themselves to parked aircraft, though disruption was minimal with no flights scheduled until the evening and commercial services unaffected.

In the US, four people were charged with trespass after chaining themselves to entryways at Charlotte Douglas airport’s corporate jet terminal in protests against private planes at 17 locations around the world coordinated by the Scientist Rebellion group.

Major American airports suffered 268 perimeter breaches in the period 2004 until 2015, according to the Associated Press, though most featured people taking shortcuts or who were mentally ill.

The Berlin incursion by Letzte Generation, or Last Generation, closed both runways, leading five services to be canceled and delaying departures and arrivals, while 15 inbound flights already en route had to be diverted to Leipzig, Dresden and Dusseldorf, several hours away by surface transport.

Deutsche Lufthansa AG, whose flights were among those affected by the protests, declined to comment.

Germany’s BDL industry association said such actions threaten air traffic and “must be prosecuted.” It said video and radar surveillance, motion detectors and contact wires are being increasingly used, but that the length of perimeters makes 100% protection impossible.

As a back up, alarms are being set up to trigger when fences is breached, so that police can quickly attend.