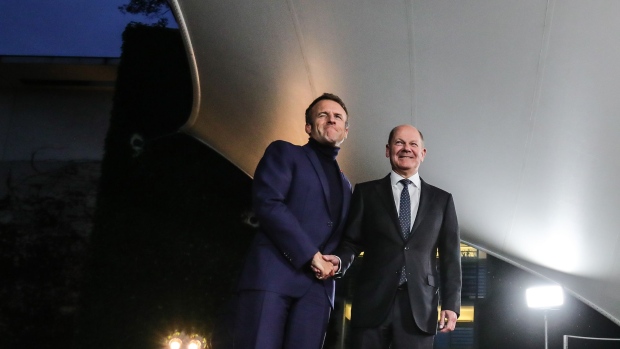 (Bloomberg) -- Emmanuel Macron and Olaf Scholz were smiling as they posed for photos before a long dinner this week in Berlin, but there was a chill in the air.

Warm platitudes and hopeful words of future defense and energy collaboration by the French president and German chancellor belied the tensions that bubbled up during the meal they were about to have, people familiar with the matter in both their countries said.

The two nations are at loggerheads on key policy areas as war rages on Europe’s frontiers, with a rift over how European Union members can protect their economies in the midst of an energy crisis and a 100 billion-euro ($99 billion) defense project at risk. Nuclear energy is another sticking point.

Since the bloc’s inception, its path and momentum has been determined by a unity of purpose when both Germany and France act together. Whenever that’s lacking, the EU gets stuck.

Macron and Scholz will meet again on Thursday at an EU summit in Prague.

Beyond differences on policy, there’s growing sense on Macron’s side that Scholz and his team aren’t treating France like a priority.

One official cited as an example the German chancellor cancelling a long-arranged call with Prime Minister Elisabeth Borne on Sept. 29 because he got Covid — only to join a press conference by video later that same day to present a 200 billion-euro borrowing plan aimed at cushioning the blow of the energy crisis for German companies and households.

A German government spokesman said that Scholz and Borne’s chat had to be postponed due to the chancellor’s Covid infection and his quarantine. He declined to comment on any plans for Scholz and Borne to speak remotely instead.

The French were irritated they weren’t told the announcement was coming, according to an official. Privately, French officials say they worry the German package will create more economic division, with the government in Berlin potentially distorting competition within the bloc by subsidizing energy for business.

After exiting his car for a meeting of European finance ministers in Luxembourg on Monday, some of France’s Bruno Le Maire’s first words to reporters were about the risk of what he called a “fragmentation” within the EU. His German counterpart, Christian Lindner, justified the plan’s rationale by saying the measures are in line with what others are doing.

The last time that a big German aid package alarmed Europeans, during the pandemic, Macron cut a deal with Angela Merkel which led to the recovery fund, and this time the two countries could ultimately end up somewhere similar.

Unease is fed by two very different political systems. One is centralized around an all-powerful French president. The other encourages coalition building and compromises in federal parliament.

Personalities come into play, too. While Macron enjoys long, complicated speeches, Scholz, like Merkel before him, prefers focused, no-frills talks. But with Merkel, the French president was always able to find a compromise. With Scholz, this seems to have gotten harder.

Over the years,  France and Germany have bickered over EU posts, the Eurozone budget and a free trade agreement with the US.

Long-standing differences over nuclear power and ways of improving EU energy infrastructure became another point of contention after Russia sent tanks to Ukraine. With Germany now exporting electricity across the Rhine, the country’s energy minister,  Robert Habeck, concluded during a closed-door meeting in August that France is the problem, according to a person present.

At the working dinner in Berlin, though, at issue was defense, according to the people.

Macron has long been a proponent of a joint European defense project to forge greater independence from the US. But Germany and other EU member states see that primarily as a bid to shore up French companies and influence — and in post-war Germany, a deep-seated skepticism towards the military has developed.

Progress is slow on the Future Combat Air System, known as FCAS. The Franco-German-Spanish project includes a jet fighter meant to replace France’s Rafale and Germany’s Typhoons jets in 2040.

Despite reassuring public comments from the French and German defense ministers — who agree it’s now up to the industry to push the flagship project forward — Germany and France are considering going at it alone, people familiar with the matter said, asking not to be identified to discuss private conversations.

Should the project unravel, French jet company Dassault Aviation SA would develop a fighter on its own, while Germany would likely rely on US imports, they said.

French and German ministers – including those in charge of defense – will get an opportunity to try to iron out their difference at a meeting on Oct. 26 in Fontainebleau, near Paris.

“We want things that fly, that drive and that are available on the market, not European development projects that don’t work out,” Bundeswehr’s General Inspector, Eberhard Zorn, told a meeting of the German Society for Foreign Policy last month.