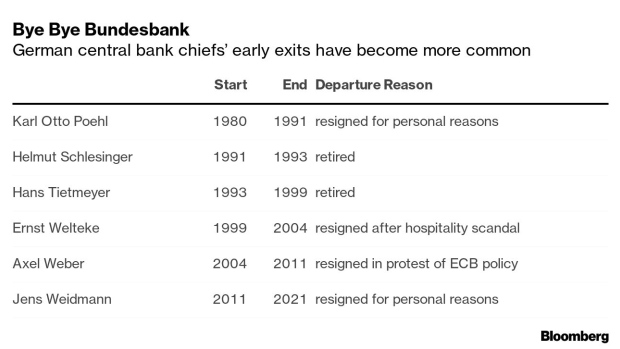 (Bloomberg) -- Germany’s guessing game on who will succeed Jens Weidmann as Bundesbank chief could last longer than usual as talks begin on forming an unprecedented coalition.

The central bank president’s surprise announcement last week that he will leave on Dec. 31 has hit Berlin at a sensitive time, with Chancellor Angela Merkel currently running only a caretaker administration in the aftermath of an election whose outcome is likely to remove her CDU party from power.

Political negotiations between coalition partners are only just beginning in earnest. While the Bundesbank presidency is crucial, fulfilling one of the most hallowed jobs in German political life along with a European Central Bank seat reserved for the region’s biggest economy, it’s possible that picking Weidmann’s successor will take time.

Here’s a closer look at the decision awaited from Berlin.

How does the nomination process work?

The Bundesbank chief is nominated by the government and appointed by the president for an eight-year term. The central bank’s board must be consulted, but parliament isn’t involved.

Since Germany is normally run by coalitions, choosing a candidate is typically a collective decision that can involve bargaining between different party interests.

That need for consensus didn’t stop swift appointments for the past two presidents, both of whom took office in the wake of a surprise resignation. Axel Weber’s nomination in 2004 was within days of Ernst Welteke quitting in an expenses furor. For Weidmann in 2011, it took a couple of weeks.

What is different this time?

This time might take longer. That’s because Merkel is leaving the choice to the next government since her outgoing administration doesn’t have political legitimacy to take a decision.

The next coalition has yet to be formed however. After weeks of post-election discussions, formal negotiations between the Social Democrats, Greens and Free Democrats on a joint governing platform just started. That combination of parties has never taken office together before, breaking new ground for the political system.

The plan is for Olaf Scholz of the Social Democrats to be sworn in as chancellor in the second week of December, Party Secretary Lars Klingbeil said Thursday.

Will the coalition talks agree on a candidate?

Such an important position, one that is normally the outcome of political bargaining, will feature in negotiations where every aspect of government policy for the next four years will be pored over forensically.

Still, Klingbeil insisted that the Bundesbank succession “won’t be a topic today” and he expects it to be a decision for the next government. Parties may also want to wait before discussions to avoid drawing out public debate over a candidate who is supposed to serve in a politically independent role.

Whether the appointment will form part of horse trading over ministerial posts is another unresolved matter. Weidmann’s exit could also complicate talks already likely to be tricky between three parties divided on the need for expansionary fiscal and monetary policies.

What sort of candidate will the coalition look for?

The formal requirement is for a person of “special professional aptitude,” which suggests a distinguished academic record might help.

Scholz is known to favor a qualified expert who can represent Germany globally and can make their presence felt at the ECB. A female appointment could also foster diversity sought by both the Greens and Social Democrats.

Rhetoric before the Sept. 26 election may also offer clues. The Greens explicitly campaigned to expand the ECB’s mandate beyond price stability to securing wealth and jobs, while the FDP spoke out against unconventional monetary stimulus. Scholz, currently finance minister, has a record of defending the ECB’s crisis management.

A compromise outcome could well mean a more moderate, less hawkish president than Weidmann, though not someone so dovish as to be vulnerable to attacks from the populist AfD, which often says expansive monetary policy expropriates money from savers.

So far, the FDP is the only party to have publicly expressed a view on the succession. Its leader, Christian Lindner, tweeted that his group would recommend “continuity.”

That hints at the job’s wider significance. The Bundesbank has a special place in national consciousness as the former guardian of the Deutsche Mark, the postwar guarantor of price stability and a bulwark against a return to the chaos heralded by the hyperinflation of the 1920s Weimar Republic. Its president wears a symbolic mantle of responsibility in Germany with few parallels elsewhere.

What happens if talks keep going?

If coalition talks founder or the parties can’t agree on another candidate by the end of the year, Bundesbank Vice President Claudia Buch would step in as interim chief.

Still, with Germany set to lead the Group of Seven in 2022 -- something Scholz has cited as a reason to quickly form a coalition -- the new government will be keen to have everyone in place swiftly.