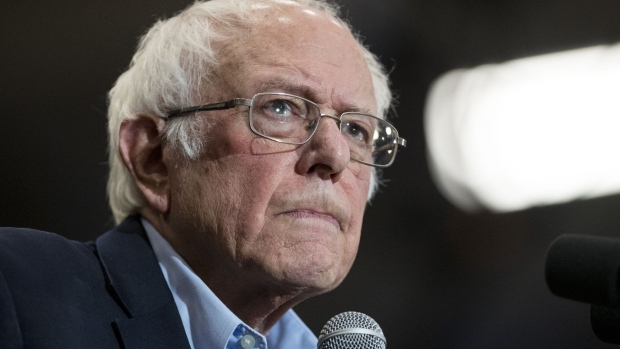 Senator Bernie Sanders, an Independent from Vermont and 2020 presidential candidate, speaks during the 'Bernie Beats Trump' Get Out The Vote Concert Rally in Durham, New Hampshire, U.S., on Monday, Feb. 10, 2020. The Democratic presidential race took on a new shape a day before the New Hampshire primary, as a national poll showed Bernie Sandersovertaking Joe Biden in first place and Michael Bloomberg surging to third place on a wave of advertising. Photographer: Adam Glanzman/Bloomberg , Bloomberg

(Bloomberg) -- PG&E Corp., the California utility that’s still struggling to emerge from bankruptcy court, is being dragged into another brutal arena -- the presidential campaign.

A new ad from Senator Bernie Sanders blasts the power company for repeatedly sparking deadly wildfires, and uses the devastation to argue for his version of a Green New Deal. It signals that the contender for the Democratic presidential nomination sees PG&E as a useful foil as California gears up for its March 3 primary vote.

Sanders has built a strong operation aimed at winning in the state, with more campaign offices there than any candidate in the race. He is leading among young voters, liberals and Latinos, who could make up one-fourth of the Democratic electorate in California.

It’s not the first time Sanders has taken aim at PG&E. Last fall, as the company cut power across northern California to prevent fires in a wind storm, he slammed its “irresponsible corporate greed.” An online petition funded by his campaign calls for a public takeover of the utility, a possibility state Governor Gavin Newsom has also raised.

The latest ad, which runs for almost three minutes, shows Sanders surveying burned out homes, as people criticize the company. A resident of Paradise, the town destroyed by a 2018 fire blamed on PG&E’s equipment, says the company only filed for bankruptcy to limit its payments to wildfire victims.

It ends with a woman’s voice saying “If we’re going to be paying for everything that PG&E does, the people of California should have a say in how it is run.” Many state residents have already received their mail-in ballots for the primary vote.

PG&E said it has already committed to $25.5 billion in settlements with wildfire victims. “We are committed to doing right by the communities impacted by wildfires, and to doing everything we can to reduce the risk of wildfires in the future,” company spokesman James Noonan said in an email.

The Sanders campaign didn’t immediately respond to a request for comment.

(Disclaimer: Michael Bloomberg is seeking the Democratic presidential nomination. He is the founder and majority owner of Bloomberg LP, the parent company of Bloomberg News).

--With assistance from Emma Kinery.

To contact the editors responsible for this story: Joe Ryan at jryan173@bloomberg.net, Pratish Narayanan, Christine Buurma