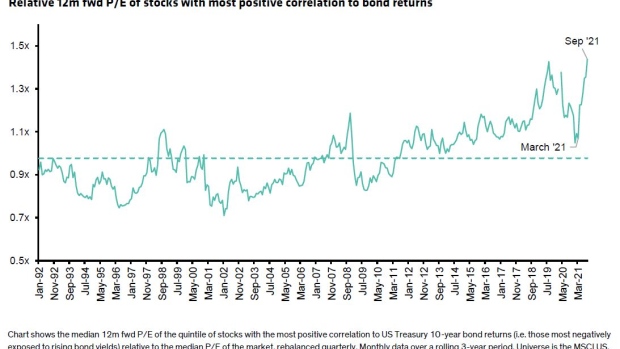 Monitors displaying stock market information are seen through the window of the Nasdaq MarketSite in the Times Square neighborhood of New York, U.S., on Thursday, March 19, 2020. New York state Governor Andrew Cuomo on Thursday ordered businesses to keep 75% of their workforce home as the number of coronavirus cases rises rapidly. , Photographer: Michael Nagle/Bloomberg

(Bloomberg) -- U.S. stocks that are booming thanks to ultra-low bond yields are now the most expensive since at least 1992, according to Sanford C. Bernstein. It’s a sign that money managers are defying inflationary threats to ride a crowded Wall Street trade.

The warning comes just as Federal Reserve policy makers gather to flesh out a plan for tapering crisis stimulus in the coming months -- a move that could awaken Treasury markets from their slumber.

With the tech corner of the equity landscape mounting a comeback in recent months, U.S. stocks that are most correlated to bonds are 30% more expensive than the market overall, Bernstein’s quant team said.

“This poses a major risk for portfolio managers,” strategists led by Sarah McCarthy wrote in a note. “There are plenty of indicators that inflation may be more widespread and persistent than many originally anticipated.”

Tech stocks took a beating Monday in the global selloff spurred by the debt crisis at China Evergrande Group. All the same, traders paring economic growth expectations on the delta-virus variant have been herding into these kind of mega-cap equities in recent months. The rationale: Such assets tend to offer reliable profit growth and outperformance in a low-rate era.

Thanks to the rally, valuations for these long-duration shares are far higher than in late 2013 or 2018 when the Fed also entertained cutting stimulus, said Bernstein. That’s based on the gap between their median 12-month forward price-earnings ratio versus the MSCI U.S. Index overall.

Meanwhile, equities that tend to do well in reflationary periods are falling out of vogue. A long-short value strategy is set for its fourth straight month of declines, erasing all gains since early March, a Dow Jones index shows. Similarly, breakeven rates -- the bond market’s indicator of inflation expectations -- have been trading mostly sideways since April.

The market action revives a debate from the pre-pandemic era, when persistently low rates meant stock winners and losers were easily sorted by their relationship to bonds.

The question now is whether the macro environment has decisively changed, with inflation potentially rising more quickly on fiscal stimulus and supply-chain pressures.

The U.S. central bank this week is seen signaling its intention to pare asset purchases with a formal announcement in November, while reassuring traders it’s not about to raise interest rates.

“If a company is perceived to have pricing power and can pass on higher inflation, then this may reduce this duration risk, particularly relative to industry peers,” McCarthy’s team wrote. “Stocks which are long duration, expensive and crowded are most at risk from an inflection in inflation expectations.”