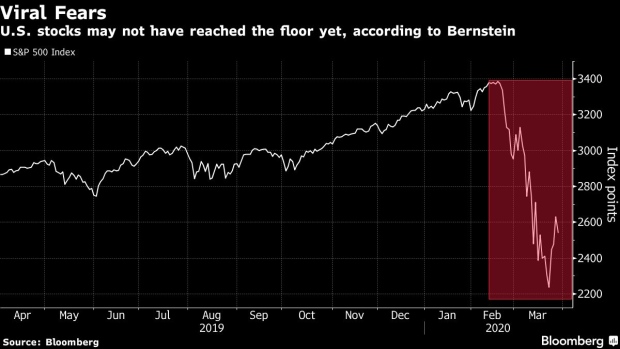 (Bloomberg) -- U.S. equities haven’t yet reached the bottom of the sell-off driven by coronavirus fears and aren’t all that cheap, strategists at Sanford C. Bernstein warn.

“We are suspicious of last week’s rally and suspect that it does not mark a floor,” the strategists led by Inigo Fraser-Jenkins said in a note on Monday. “We still face massive uncertainty on the length of the lockdown period for major economies.”

While the S&P 500 surged 10% last week along with global equities on optimism that a $2 trillion stimulus package and fresh assurances from the U.S. Federal Reserve may be enough to prevent a deep recession, the pandemic remains in a critical state. Bernstein points out that until lockdown measures are lifted and consumers resume spending, there’s unlikely to be sufficient growth in demand to stimulate major economies.

It’s unclear when Europe and the U.S. will be able to start lifting restrictions as European officials warned against loosening lockdowns after the outbreak killed more than 3,000 in Spain and Italy over the weekend and President Donald Trump abruptly abandoned his ambition to return life to normal in the U.S. by Easter.

Looking at the valuations of U.S. equities, and considering the “unprecedented” drop in bond yields, Bernstein said that it’s unfair to compare price-to-earnings ratios to historical levels and it’s better to study the forward equity-risk premium. Bernstein expects the U.S. earnings risk premium -- or the return from equities exceeding that from government bonds -- in 2021 to be 6.5%, which is close to prior crisis peaks but not beyond them.

“The conclusion is that equities are significantly cheaper than their average level compared to bonds, but not at an extreme point of valuation that would allow one to claim that they offered unconditional value,” the strategists said. “A positive market call thus could not rest on a valuation argument alone at these levels.”