Revenue fell 8.5 per cent to US$10.6 billion in the three months ended in late April, Best Buy said in a statement Tuesday. That exceeded the US$10.4 billion average of analyst estimates. Same-store sales also fell less than expected, while a moderate increase in inventories contrasted with the surges that prompted markdowns at Walmart Inc. and Target Corp.

The results offered investors a measure of relief as US retailers struggle to shore up profit while costs soar and consumers grapple with the highest inflation rates in four decades. While the quarter was expected to be weak as the US economy lapped an injection of government stimulus in early 2021, Best Buy dodged the sharp earnings deterioration seen by some other retail chains. 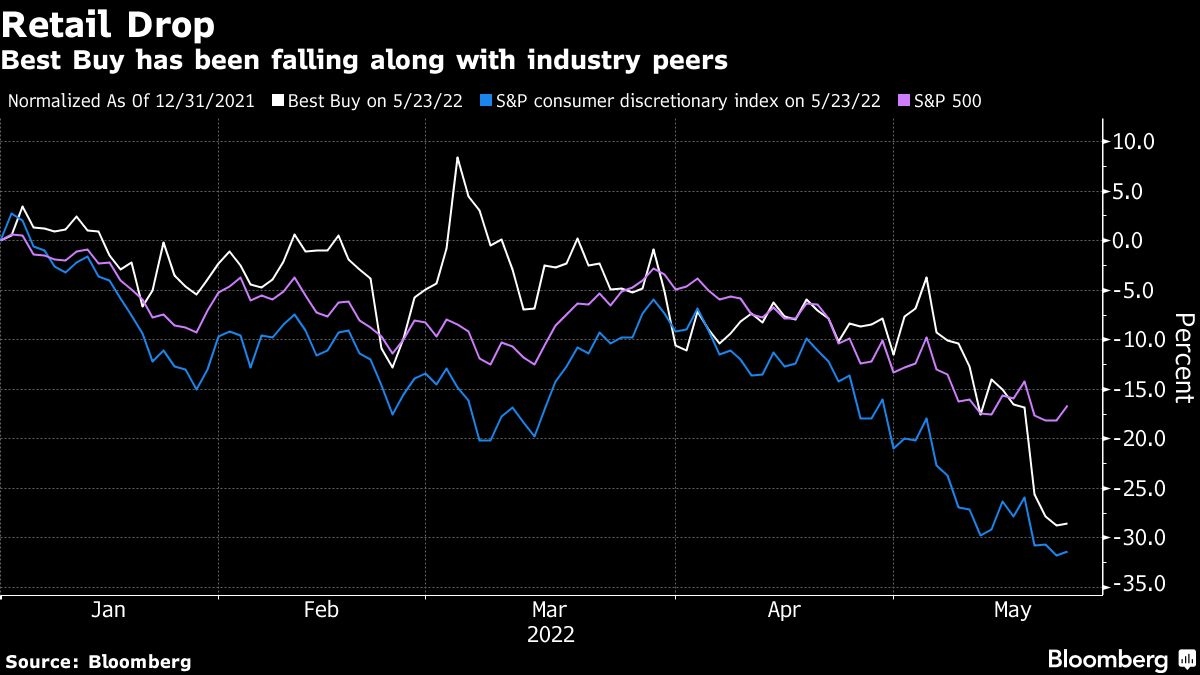 “Even with the expected slowdown this year, we continue to be in a fundamentally stronger position than we were before the pandemic from both a revenue and operating income rate perspective,” Chief Executive Officer Corie Barry said in the statement.

Best Buy rose 1.5 per cent at 7:55 a.m. in New York, paring an earlier gain of as much as 10 per cent ahead of regular trading. The shares had fallen 29 per cent this year through Monday, while an S&P 500 index of consumer-discretionary stocks declined 31 per cent.

The retailer’s executives will discuss the results on a conference call with analysts at 8 a.m. New York time.

The worsening economic backdrop prompted Best Buy to cut its annual forecast for earnings, revenue and same-store sales. The company also revised its outlook for operating profit to between 5.2 per cent and 5.4 per cent of sales, down from the previous prediction of 5.4 per cent.

In the first quarter, adjusted earnings fell to US$1.57 a share, trailing the US$1.60 average of analyst estimates compiled by Bloomberg. Comparable sales fell 8 per cent, while analysts had expected a 9.4 per cent drop.

Specialized retailers like Best Buy appear to be faring better than the big discounters and department stores whose weak results roiled markets last week. Petco Health and Wellness Co. posted stronger-than-expected adjusted earnings and sales on Tuesday, causing its shares, which had been heavily shorted by investors, to gain more than 4 per cent in premarket trading.

Similarly, AutoZone Inc.’s comparable sales in its just-ended third quarter were stronger than Wall Street expected. Investors recently have been betting against the stock, which was down 14 per cent this year through Monday’s close.