Best Buy Co. reported weaker-than-expected holiday sales and said anticipated shifts in consumer spending back to areas like dining out and travel could hamper its performance this year.

Comparable-store sales in the U.S. -- a key gauge of performance -- rose 12.4 per cent in the fiscal fourth quarter that ended Jan. 30, missing the average projection from Consensus Metrix. The midpoint of Best Buy’s sales-growth forecast range for the current year also fell short of analysts’ estimates. Shares of the electronics retailer fell as much as 8.9 per cent, the most since Nov. 9, before paring some of their losses.

Although demand for its goods remains above normal levels, “there is a high level of uncertainty related to the impacts of the COVID-19 pandemic that makes it difficult to predict how sustainable these trends will be,” Chief Financial Officer Matt Bilunas said in a statement.

The company’s sales forecast -- which it called a “working assumption” -- presupposes that consumers resume spending in areas like travel and dining out in the back half of the year.

“The slower growth from the fourth quarter already indicates that a little bit of steam is coming out of the electricals market,” said Neil Saunders, an analyst at Global DataRetail. “There are limits as to how much consumers can, and want to, buy.” 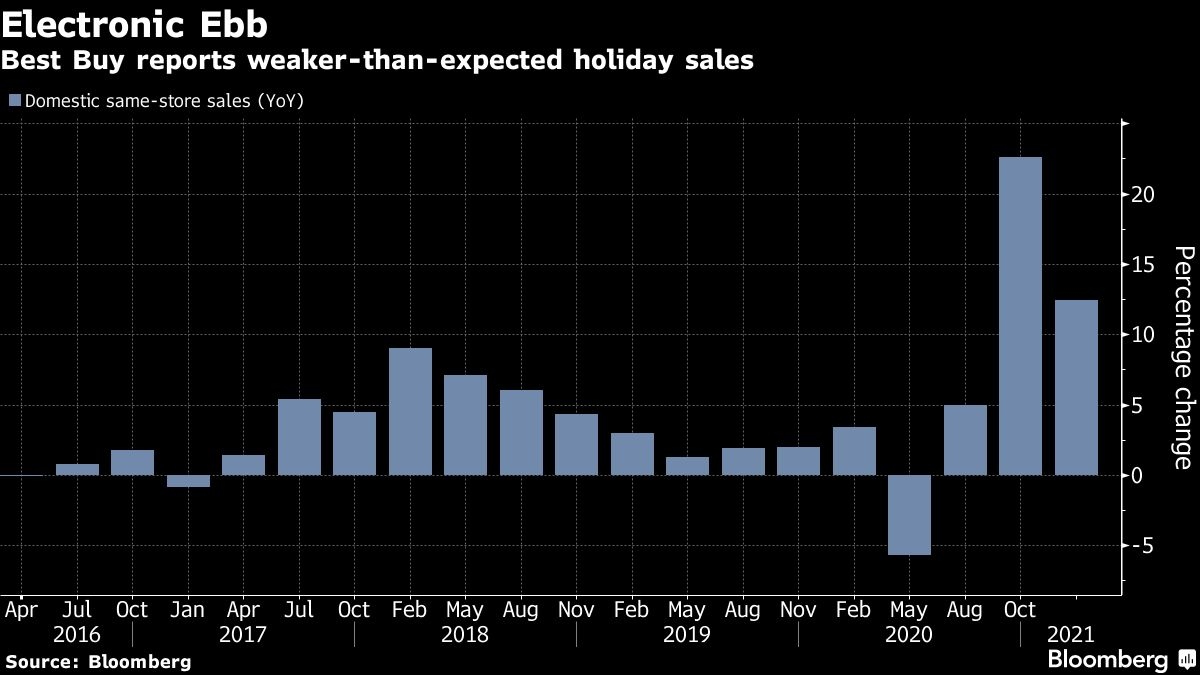 Best Buy was a winner during the pandemic as Americans sought out gadgets for home offices, new kitchen appliances to cook at home, and video games to stay entertained. But with more shoppers going online, its cavernous stores are becoming outdated, evidenced by the abrupt shutdown of rival Fry’s Electronics this week. Best Buy is reducing and retaining staff and streamlining store layouts to focus on getting online orders out the door. Still, demand for its goods could wane as the pandemic recedes and consumers start spending again on things like restaurants and leisure activities.

The miss over the holiday period was due in part to store closures and weak demand for items like headphones and mobile phones, the U.S. retailer said.

Best Buy said it laid off about 5,000 employees earlier this month, most of them full-time staffers, as it adjusts its labor needs in a more digital environment. The Richfield, Minnesota-based company also added about 2,000 mostly part-time roles. The pace of store closures will increase from the 20 or so it’s shut in each of the past two years, Chief Executive Officer Corie Barry said on a conference call with analysts. Best Buy has just under 1,000 U.S. stores currently.

The layoffs, combined with attrition and other reductions, meant that Best Buy has cut its total labor force by 17 per cent over the past year to 123,000 people.

“Customers have completely changed the way they are thinking of shopping,” Barry said. “With that big a digital shift in such a short period of time, we are doing all we can to adjust to that new reality.”