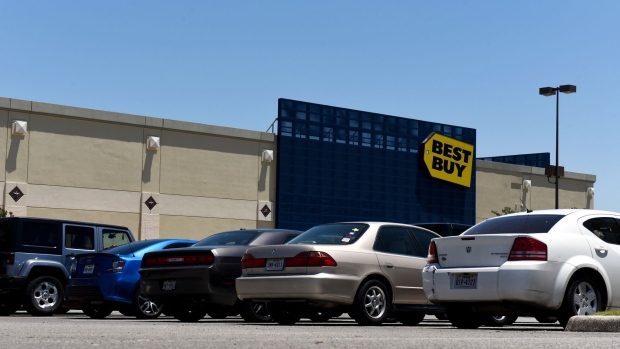 Best Buy Co. shares fell after the U.S. electronics retailer warned that demand could slow during the critical holiday season after Americans started shopping early amid the pandemic.

The quicker start to gift buying and Amazon.com Inc. moving its Prime Day into October, which lifts gadget sales across the industry, boosted Best Buy’s same-store sales by 23 per cent in the fiscal third quarter that ended on Nov. 2. That topped estimates for a 14 per cent gain. That level of growth continued this month, but won’t sustain the same rate going forward, the company said.

Best Buy’s results and investors’ reaction to them highlight the volatility of the COVID-19 era. The company blew past all expectations, but the case can be made this is as good as it’s going to get for the chain. In the fourth quarter, inventory shortages in categories like large appliances and new gaming consoles from Microsoft and Sony could hinder growth. And heading into next year as consumers get vaccinated and shift spending to areas like travel, demand for technology could wane.

“It’s likely that some of that continues on as we go into the beginning of next year,” Best Buy Chief Financial Officer Matt Bilunas said on a call with analysts. After that, it “may start to subside a bit.”

The shares fell as much as 7.2 per cent on Tuesday. Through Monday, the shares had soared 39 per cent this year.

Like in the two previous two quarters, the U.S. electronics retailer said it won’t provide guidance ahead of the crucial holiday season. Its only forecast of sorts is that sales will gain, but at a slower rate.

“The demand for the products and services we sell remains at elevated levels, but similar to last quarter, it continues to be difficult for us to predict how sustainable these trends will be,” Bilunas said. “There continue to be other factors to consider such as potential future government stimulus actions.”

Another factor weighing on growth last quarter was offset by a decline in mobile phone sales. Apple Inc. introduced its latest iPhone model later than usual this year.

Best Buy said it’s testing new store formats, including one that turns a portion of retail selling space into an area for fulfilling online orders.

Earnings per share of US$2.06 topped expectations of US$1.72, the average of estimates compiled by Bloomberg. A big lift to revenue was e-commerce, which surged 173 per cent. That came after online revenue more than tripled in the previous period.

But more e-commerce often weighs on profitability because of the cost of all the shipping and returns. Last quarter, the company’s gross margin was 23.6 per cent, down from a year ago but still topping estimates of 23.3 per cent.

Retailers are heading into what’s typically the busiest season of the year with the virus raging across the U.S., threatening visits to stores. But many have started holiday and Black Friday discounts. Best Buy has spread its deals out across the month and is touting its curbside and in-store pickup services.

Those moves have helped reduce crowding in stores, but looks like they will also dampen fourth-quarter sales.

Best Buy also said it exited its business in Mexico that generated about US$400 million in sales a year.