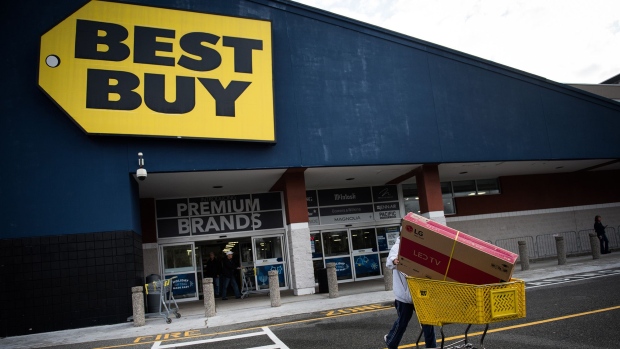 A customer stands next to a shopping basket at the check out counter of a Best Buy Co. store in San Antonio, Texas, May 17, 2018. Bloomberg

Comparable-store sales in the U.S. — a key gauge of performance — rose two per cent, beating analysts’ projections for a 1.4 per cent gain, according to Consensus Metrix. The retailer also boosted its forecast for sales and profit this year.

-Chief Executive Officer Corie Barry faces her first big test this holiday period, and she has a high bar to clear as Best Buy has performed well during that stretch the past two years. Despite a warning in August about “general uncertainty” in demand for its products, Chief Financial OfficerMatt Bilunas cited “improved expectations” for the current quarter.

-Best Buy overcame broader declines in consumer electronics sales in recent months. It’s starting to expand beyond its traditional segment into areas like health care by selling goods from fitness machines to in-home sensor networks for seniors. The push could deliver as much as US$46 billion in additional revenue over the next 10 to 20 years, Morgan Stanley estimates.

-Best Buy and other retailers have been offering more ways to get their online orders delivered to fend off Amazon.com Inc., and the strategy paid off last quarter. Comparable online sales increased 15 per cent, topping the gain predicted by analysts.

-Best Buy has been among the winners in a bifurcating U.S. retail industry, with companies like Target Corp., Walmart Inc. and Costco Wholesale Corp. taking market share while laggards including J.C. Penney Co., Macy’s Inc. and Kohl’s Corp. are losing out.

-Looming tariffs remain a concern for Best Buy, as it’s among the most exposed retailers to the expanded roster of 15 per cent tariffs on Chinese imports that could hit Dec. 15 if efforts to reach a trade deal fail. About 60 per cent of Best Buy’s goods come from China, but that could fall to 40 per cent next year as vendors shift manufacturing. The company said Tuesday that its updated forecast includes its best estimate of the tariff impact.

Best Buy rose as much as 5.8 per cent in premarket trading. The shares had gained 40 per cent this year through Monday’s close.