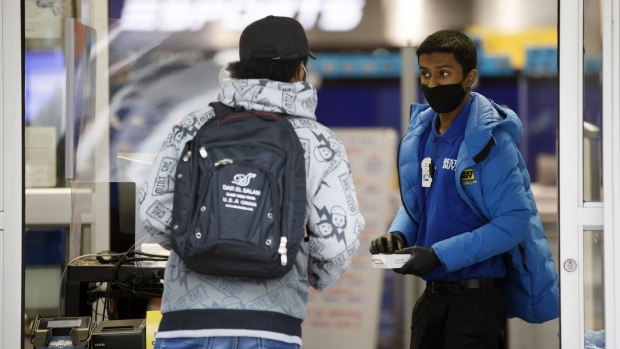 An employee wearing a protective mask assists a customer with a curb-side pickup order at a Best Buy Co. Inc. store in Toronto, Ontario, Canada, on Monday, Nov. 23, 2020. Canada's largest province ordered a lockdown in Toronto and one of its suburbs, a declaration that forces shopping malls, restaurants and other businesses to close their doors to slow a second wave of coronavirus cases. Photographer: Cole Burston/Bloomberg , Bloomberg

In scenes reminiscent of the year’s biggest shopping day, customers flocked to its stores Thursday as the electronics retailer restocked several of the past year’s hottest video-game consoles. The move, announced by Best Buy a day earlier, involved “limited quantities” of Sony Corp.’s PlayStation 5 and Microsoft Corp.’s Xbox Series X for customers who showed up early to get a ticket.

The products were one of the hot items of last year’s holiday season and are poised to be a top-seller again, as persistently low stock has kept demand high. The problem, underpinned in part by pandemic-driven challenges, has been exacerbated by online scalpers, who use technology to buy the consoles and then resell them at a higher price.

These bots monitor e-commerce platforms for changes in inventory, automatically placing orders in seconds when devices become available. That makes in-person releases like Best Buy’s an opportunity for average buyers to get their hands on products they otherwise couldn’t.

Console manufacturers have relied on scarcity to maintain demand, releasing only a handful of units at a time. Reports indicated that some Best Buy locations had only 50 units of each console available. Best Buy has not immediately confirmed.