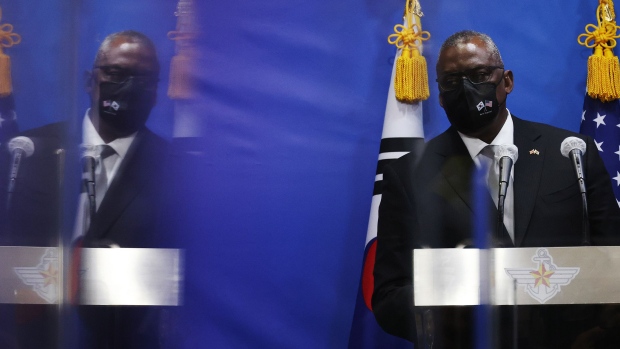 (Bloomberg) -- Secretary of Defense Lloyd Austin said the U.S. remains concerned about a Russian military buildup near the Ukraine border region and called on President Vladimir Putin to be transparent about his actions.

“Russia has a substantial amount of forces in the border region,” Austin said in Seoul on Thursday during a visit to discuss security cooperation with South Korea. “The best case is that we won’t see an incursion,” he added.

The U.S. has ratcheted up threats to retaliate as it accused Russia of intensifying preparations for a possible invasion of Ukraine, in the latest signs that tensions over Moscow’s military buildup on the border continue to spiral. The Kremlin denies it’s planning any action against Ukraine and accuses the West of provocative actions near Russia’s borders.

“I don’t care to speculate on a potential response,” Austin said.

But Secretary of State Antony Blinken warned Wednesday at a NATO conference in Latvia that the U.S. would impose “high-impact economic measures that we’ve refrained from using in the past” if Russia invaded its neighbor.

Putin showed no sign he was deterred by weeks of warnings from the U.S. and its allies, accusing the North Atlantic Treaty Organization of menacing Russia. He demanded “legally binding” security guarantees that would keep NATO weapons out of Ukraine.

Why Russia-Ukraine Tensions Are So Hard to Defuse: QuickTake

Russia annexed Crimea from Ukraine in 2014 and backed pro-Moscow separatists in eastern Ukrainian regions in a conflict with the Kyiv government that has killed more than 13,000.

Ukrainian President Volodymyr Zelenskiy said Wednesday direct talks with Russia are the only way to resolve the conflict. But the Kremlin brushed off that appeal, saying Kyiv should negotiate with the separatists, something Zelenskiy’s government has refused to do.

Austin also said he was concerned about advances made by China’s military. When asked about Beijing’s test of a hypersonic weapon, Austin said he was disquieted about the military capabilities the country is pursuing and the U.S. would continue “to defend and deter” against potential Chinese threats to America and its allies.

The U.S. and its South Korean ally reiterated their intention to bolster cooperation along with Japan, Austin said. He also encouraged North Korea to return to stalled nuclear disarmament talks and said Kim Jong Un’s regime continues to advances its missile and weapons capabilities.