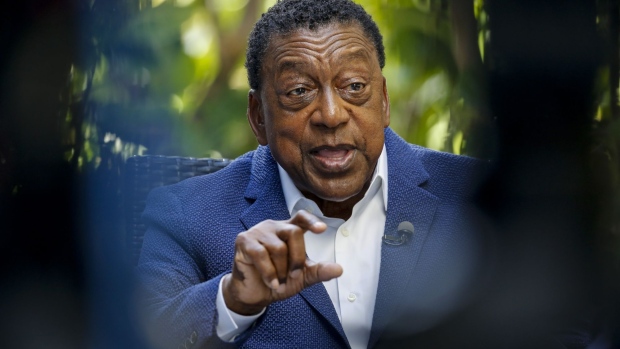 Bob Johnson, co-founder of BET, during an interview on an episode of Bloomberg Wealth with David Rubenstein in Palm Beach, Florida, US, on Wednesday, Nov. 23, 2022. , Bloomberg

(Bloomberg) -- Robert L. Johnson, co-founder of BET and the first Black billionaire in the US, says few Black workers and entrepreneurs are reaping the benefits of the billions of dollars companies pledged following 2020's Black Lives Matter protests.

“I can tell you, the Black community, entrepreneurs I know, are very disappointed with these, what I call, press release announcements with no results,” Johnson said on The David Rubenstein show that aired Wednesday.

In the wake of George Floyd’s murder, dozens of major US companies promised money to racial-equity causes such as promoting Black businesses or improving diversity and representation within their own ranks. One analysis from the Washington Post found that about 90% of the almost $50 billion in funds pledged by 44 large public US companies came in the form of loans and investments from which the firms could profit. Just around $4 billion — or around 8% — came in the form of outright grants.

“The sad secret of that is companies — White companies — have announced that they're gonna put millions of dollars into diversity, in terms of Black investment and business,” said Johnson, the chairman of RLJ Companies, an asset management firm. “But among the people I know... it's really not happening.”

Johnson stressed the need for an audit and for companies to be transparent with their progress. More firms have started to share data on workforce demographics, and some have even reported making progress in hiring and promoting Black employees.

But even in the places where there has been measurable progress, there’s risk of plateauing or even backsliding. Layoffs in the tech industry are hitting diversity, equity and inclusion departments hard. And venture-capital funding for startups with Black founders slowed in the second quarter of 2022, after a record-setting year in 2021.

“It's just not easy” for Black entrepreneurs trying to start businesses today, Johnson said. “It is correct to say people think about it more. But do they do more? That’s the problem.”