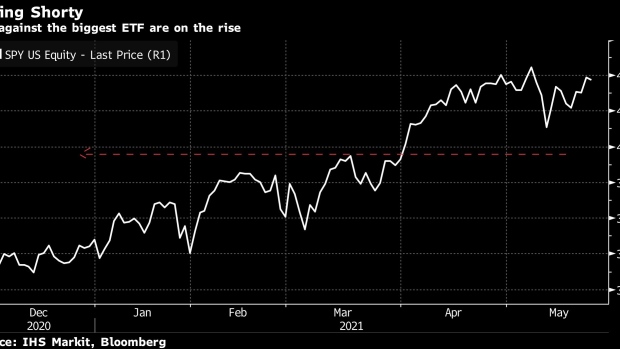 (Bloomberg) -- Investors are increasing wagers against the S&P 500 by shorting the world’s biggest exchange-traded fund.

With the benchmark U.S. equity gauge oscillating near its all-time high, short interest in the $357 billion SPDR S&P 500 ETF Trust (ticker SPY) has jumped to the highest this year, according to IHS Markit Ltd. data.

About 4.8% of the fund’s shares are now out on loan, the data show. That compares with 2% less than two months ago and 1.7% at the start of the year.

While the measure remains well below highs of the last two years -- it rose above 7% more than once in 2020 -- the bearish turn comes at a fragile time in markets.

“The surging short interest in the S&P 500 is in part due to skepticism that the rally can continue or at least that we are due for a pullback,” said Chris Zaccarelli, chief investment officer at Independent Advisor Alliance. “We don’t think the bull market is in any danger of ending prematurely. But with a 10% or greater pullback happening on average once every two years (at least since 1980), we do believe a pullback of that magnitude is likely this year.”

Investors have been rotating to stocks more exposed to the economic cycle, but episodes of volatility have hit as they also fear faster inflation and the prospect of higher interest rates. Meanwhile, drama in the most speculative parts of the market like cryptocurrencies have fueled worries that sentiment is stretched too far on the bullish side.

Indicators at Citigroup are still in “euphoria territory,” strategists led by Tobias Levkovich said in a report Friday. That’s generating a “100% historical probability of down markets in the next 12 months at current levels,” they wrote.

Meanwhile, Chris Murphy, co-head of derivatives strategy at Susquehanna International Group, noted on Tuesday that real dividend yield and real earnings yield for the S&P 500 have both recently turned negative.

However, the Susquehanna team said they expect any pullbacks to be short-lived. They also noted that short interest in U.S. stocks remains low by historical standards.