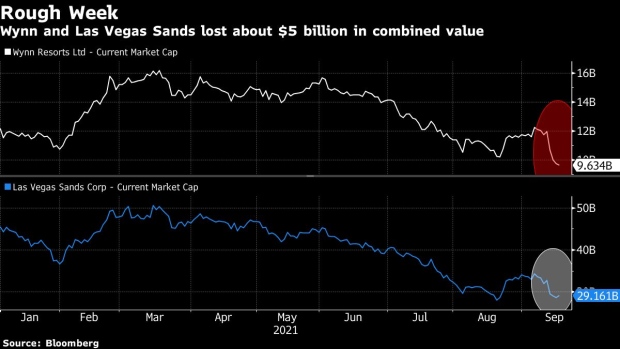 (Bloomberg) -- China’s crackdown on U.S.-listed stocks claimed more victims this week as casino operators got torched after regulators in Macau said they were tightening restrictions and appointing government representatives to oversee the companies.

Wynn Resorts Ltd. plunged 18% over the five days for its worst week since June 2020, while Las Vegas Sands Corp. tumbled 9% and posted its biggest weekly decline since January. The companies generate about half their revenue from Macau, the world’s largest gambling hub, which is on the other side of the Pearl River Delta from Hong Kong in southern China. Combined, Wynn and Las Vegas Sands saw about $5 billion in market value evaporate this week.

Now, Wall Street is starting to weigh in on the emerging geopolitical risk tied to these companies. JPMorgan cut its ratings on Wynn, Las Vegas Sands and Melco Resorts & Entertainment Ltd. to neutral from the equivalent of buy on Thursday. Hong Kong-based Melco also lost 21% this week for its worst performance since 2008. And Jefferies Group on downgraded Las Vegas Sands to hold from buy on Friday.

“We don’t like the uncertainty and opacity surrounding Macau and China policy,” JPMorgan analysts led by Joseph Greff wrote in a research note.

All of which leaves investors pondering the same question that’s bedeviled shareholders of companies in China’s technology, education and video game sectors, all of which have been roiled by Chinese government meddling this year: How far will the crackdown go?

The tighter grip from regulators in China comes at a tough time for casino companies already reeling from slumping traffic as the Covid-19 pandemic drags on. For most, business has rebounded from the depths of the crisis in 2020, but the number of players remains well below pre-pandemic levels. Las Vegas Sands, the world’s largest casino operator by market value, is one example. It generated $1.2 billion in revenue in the second quarter compared with $3.3 billion in the same period of 2019.

That said, investors aren’t folding on these companies just yet.

Louis Lau, a U.S.-based fund manager with Brandes Investment Partners LP, said this week’s selloff in Macau-exposed stocks appears to be an over-reaction with the market pricing in a more drastic scenario of significantly reduced ownership for foreign casino operators. And while the situation is likely to be murky for months, over the longer term Macau gaming companies remain attractive, he said.

“The Macau government needs these companies to maintain and create jobs for the local population and develop the city into a tourist destination,” including supporting the Chinese government’s Hengqin Island expansion plan, Lau said in an interview.

To Jason Ader, co-chief executive officer at Springowl Asset Management and a former Las Vegas Sands board member, tighter regulations and increased taxes in China are the opposite of what investors want to see. But, the situation for Macau operators is still tolerable.

“I think if you did a symposium of casino industry types and they knew the government was not listening, they would not be unhappy,” he said in an interview. “It could be a lot worse.”