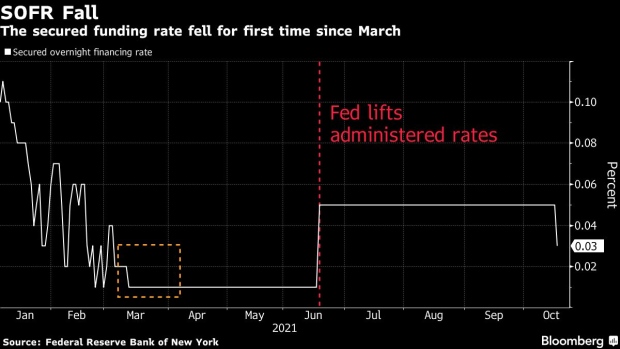 (Bloomberg) -- Bets on rising U.S. yields are adding to pressure on interest rates in the short-term funding market, where institutional holders of cash make overnight loans collateralized by Treasury securities.

Yields on two-year notes touched 0.44% this week, the highest level in more than a year, as investors priced in Federal Reserve rate hikes. A surge in demand to borrow the newest two-year note for short positions drove the interest rate on overnight cash loans backed by the security to the special rate of minus 0.55%, according Oxford Economics. For loans backed by non-specific Treasuries, the general collateral rate was 0.02%.

The general collateral repo rate was already under pressure owing to the glut of cash created by the Fed’s asset purchases and the Treasury’s shrinking holdings. The monthly influx of cash from the government-backed mortgage companies made it worse, and now bets on interest-rate increases by central banks globally are piling on.

“It’s a straining combination,” said TD Securities strategist Gennadiy Goldberg. The repo specials “were already stressing the market, which exacerbated the impact of the GSE cash coming in.” Government-sponsored enterprises include Fannie Mae and Freddie Mac.

Repo market “specials” may explain the first drop since March in the Secured Overnight Financing Rate, to 0.03% from 0.05%, according to Federal Reserve Bank of New York data released Wednesday.

The benchmark rate’s calculation includes bilateral Treasury repo transactions cleared through the Fixed Income Clearing Corporation’s Delivery-versus-Payment service, which is filtered to remove a portion of transactions considered special, according to the New York Fed’s website.

“GSE cash then jumping on the pile may be what finally resulted in SOFR printing lower, but it is not the only factor,” BMO Capital Markets strategists Dan Krieter and Daniel Belton wrote in a note to clients. “While cash certainly remains excessive in the financial system, that has been true for months.”