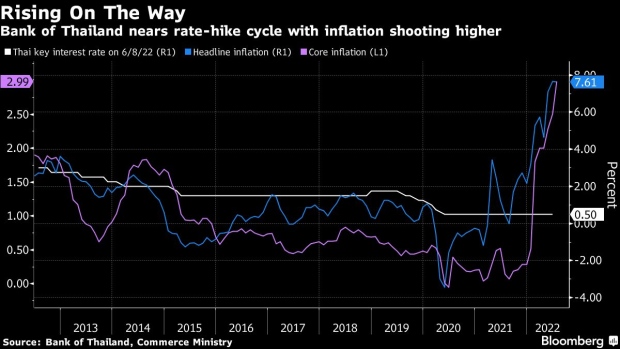 (Bloomberg) -- Thailand’s policy makers will likely raise the policy rate for the first time in more than three years on Wednesday, taking a while to act against inflation to shield economic growth.

All 27 economists surveyed by Bloomberg as of Tuesday expect the Bank of Thailand to raise the one-day repurchase rate from a record-low 0.5%, with 24 predicting a quarter-point move and three for a half-point hike.

An increase will be the first since December 2018 and one that is overdue, given central bankers including Governor Sethaput Suthiwartnarueput have underscored months ago about the need to act sooner rather than later against inflation at a 14-year high.

Even Finance Minister Arkhom Termpittayapaisith, who had sought borrowing costs to be kept low, signaled on Monday that a rate hike is inevitable and cautioned the central bank against a steep tightening path. Even if the BOT resorts to a larger hike, it will still be lagging counterparts in India and the Philippines that have raised rates by more than 100 basis points this year.

“It’s quite a sure bet that the rate will be raised at this meeting,” Nattaporn Triratanasirikul, an economist at Kasikornbank Pcl’s research unit, said. “We expect Thai rate hike cycle to be gradual and steady to ensure the smooth recovery with at least two hikes at the remaining three meetings this year.”

Here’s what to watch out for in the BOT statement, expected at 2 p.m. local time:

The central bank will likely affirm its view that the economy’s recovery is on track, although inflation remains elevated, supporting the case for monetary tightening.

Prime Minister Prayuth Chan-Ocha last week said that growth is seen to accelerate to 4.2% in 2023, supported by rising tourist arrivals and exports. The government’s latest forecast for foreign arrivals this year is 10 million, well above the 6 million predicted by the central bank previously. The National Economic and Social Development Council will release last quarter’s GDP performance on Aug. 15.

Headline inflation rate at 7.61% last month was a tad below June’s 7.66%. Still, the pace is way above the central bank’s 1%-3% target. Core price gains, which strips out volatile food and fuel items, was almost 3% in July, quickening from 2.51% a month earlier.

The market will be closely watching for any signal for further policy moves, amid concerns about rising inflation and interest rate differentials between Thailand and the US.

That trend may trigger capital outflows, with the baht weakening nearly 8% in the past six months, among the worst performance in Southeast Asia.

The central bank has repeatedly said its intervention on the local currency is only to curb excessive moves. The policy maker doesn’t have a foreign exchange rate target and lets the market determine the level.