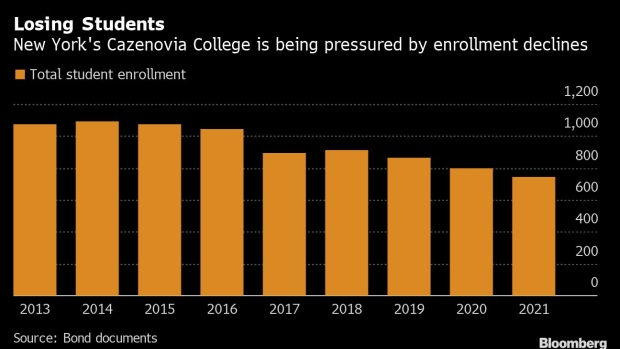 Now, tiny Cazenovia College, in rural upstate New York, is fast becoming a case study for the financial pressures driving scores of small, not-so-famous colleges to the brink. At a time when even some big, well-known universities are feeling pinched -- and the cost and value of a college degree are in question -- the long-feared shakeout in American higher-ed finally appears at hand.

Cazenovia, home to ZAC the Wildcat and a 240-acre equine facility, is smack in the middle of it. Three years ago, when it was already struggling with declining enrollment, the college borrowed $25 million in the municipal-bond market, in part to update its campus.

Last month, it defaulted on that debt, after an effort to refinance it was unsuccessful, pointing to a fate that could await similar institutions. Down to about 750 total students, and with an all-in cost of $51,404, Cazenovia could limp along for now if it can strike a deal with bondholders by a Nov. 3 deadline. But its future is, at best, uncertain.

Cazenovia is hardly alone. About $653 million of outstanding debt sold for US colleges and universities has defaulted or has payments at risk, data compiled by Bloomberg show. In 2021, Ohio Valley University, a small Christian college in West Virginia, shut down, after defaulting on about $9 million of muni bonds. In September, Regions Bank filed a lawsuit on behalf of bondholders demanding repayment on $9 million of debt sold by the now-shuttered Judson College in Alabama.

The brutal borrowing backdrop in the municipal-bond market, where colleges often seek financing, is increasing the strains, with interest rates surging and skepticism toward struggling credits growing along with the risk of recession.

Even before the pandemic shuttered schools for months or longer, many were under pressure. A third of US universities face an “unsustainable financial future,” and about 100 closed or merged from 2010 to 2020, Bain & Co. consultants said in a July report.

Some schools have come back from the fiscal brink. Sweet Briar College in Virginia nearly closed in 2015, before alumnae raised the needed funds.

Cazenovia “intends to work with Bondholders towards a mutually acceptable resolution of the College’s obligations,” William Veit, the school’s chief financial officer, said in an Oct. 3 securities filing.

Timothy Greene, a Cazenovia spokesperson, said Wednesday that the school “is structuring a debt modification that is moving forward in a positive direction.” He declined to comment further.

The unrated bonds Cazenovia sold three years ago were for refinancing and other needs -- including dorm upkeep. By that time, it was well into its battle to stabilize enrollment, which has shrunk from about 1,100 in 2014, a figure that includes all full- and part-time students.

New York’s push to provide free tuition at public colleges to lower-income residents contributed to the decline. In borrowing documents, the school also cited unfavorable demographic trends. The number of New York high school graduates is projected to drop by 14% in 2037 from 2019, according to the Western Interstate Commission for Higher Education.

Cazenovia has tried to boost enrollment, even increasing its acceptance rate to 96% in 2021, from 90% in 2013, according to bond documents.

For now, the bonds -- secured by the college’s campus and revenue -- pose the biggest immediate threat to Cazenovia’s future, rather than a lack of students.

Auditors said in a January report that school management had concluded that uncertainty around the debt “casts substantial doubt about the College’s ability to continue as a going concern within one year from issuance of these financial statements.”

The bond was structured so it all came due Sept. 1, a different approach from how many muni issuers borrow, through debt maturing in chunks over a long horizon, making it easier to pay off.

In June, Cazenovia tried and failed to borrow to refinance the debt due in September, bond documents show. Its missed principal payment last month then led to talks with investors. The bondholders’ trustee, UMB Bank, agreed not to act until a forbearance agreement ends in November, a filing shows.

A spokesperson for UMB declined to comment, as did representatives for Nuveen and Abrdn Plc, which are among the bondholders.

Bondholders have an incentive to restructure the deal to maximize what they recover, said Lisa Washburn, managing director at Municipal Market Analytics. But without a turnaround in enrollment longer-term, the school may need to merge with a rival or even close, she said.

Analysts who follow higher-education see risk for other schools as well if they can’t access the bond market.

“It is going to be harder to be able to restructure debt and find the debt-service relief and savings in this interest-rate environment,” said Dora Lee, director of research at Belle Haven Investments.