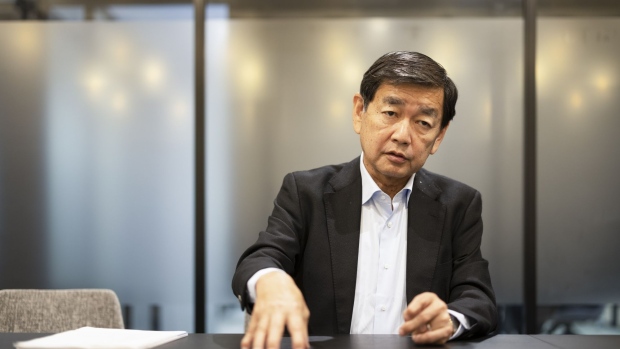 Eiji Hirano during an interview in Tokyo on June 23. , Bloomberg

(Bloomberg) -- The former head of the board of governors at the world’s largest pension fund said he sees signs of a “bubble” in environmental, social and governance investing, and said the Japanese fund needs to consider how much ESG assets contribute to returns.

Eiji Hirano, who was chairman of the board of governors of Japan’s Government Pension Investment Fund from 2017 until earlier this year, presided over a tumultuous period for the fund as it became a world leader in ESG investments. The fund now needs to reassess its approach to ESG, he said.

“The GPIF needs to go back to its roots, and think about how to analyze if ESG is really profitable, as well as how to evaluate and standardize ESG,” he said in an interview. “It’s a little like an ESG bubble right now, and we should evaluate both the good and the bad.”

The board of governors, which was formed in 2017, has a supervisory role and oversees matters such as asset allocation and compensation, though not day-to-day operation of the fund. The 178 trillion yen ($1.6 trillion) GPIF will report results on July 2 for the year ended March, and is expected to announce record-breaking returns.

In an interview with Bloomberg News in Tokyo on June 23, Hirano touched on subjects including the possibility the fund will need to reconsider the weighting of domestic stocks in its next portfolio review, the role of alternative assets, and the choice it faces over investing in Chinese sovereign debt.

The following are some highlights:

GPIF was a pioneer of ESG investing in Japan, hailed as a fund that tried to “change the world” through its bold approach under former Chief Investment Officer Hiromichi Mizuno and former President Norihiro Takahashi.

The fund has gone comparatively quiet on ESG under its new management. Hirano says it’s less vital for the GPIF to be on the forefront of ESG cheerleading, and said the fund should examine the true returns from the burgeoning asset class.

“Under the leadership of Takahashi and Mizuno many bold steps were taken on ESG,” Hirano said. “It’s part of the corporate governance code now, and the government has now started to wave the banner on issues like climate change. The trend has been established, even if the GPIF isn’t the one leading the charge.”

The GPIF’s major portfolio reviews are held about every five years. In 2014, a sweeping review moved much of the fund’s assets from bonds to stocks. Last year, it cut the allocation to domestic debt and placed it in overseas bonds instead.

That means the fund now has about 25% of its portfolio each in foreign and domestic equity and debt. The next major review is due in 2025, and Hirano predicts the allocation of Japanese stocks will be in focus.

“The weight of Japanese shares among global markets is about 6-7%. From the perspective of a professional, the current 25% weighting for Japanese stocks is too high,” he said. “It’s not unusual to have a ‘home bias,’ but in the next mid-term plan that will go into place in April 2025, this will likely be one of the areas of discussion.”

“The more cautious you are about the future, the more risk you need to include in your portfolio -- a contradictory mechanism,” he added.

The main task facing the fund is boosting public understanding of its returns, Hirano says. The GPIF has a mandated investment return of 1.7% above nominal wage increases, with the fund targeting about 3% overall, he said.

“With rates in Japan near zero, and having declined worldwide too, getting 3% from the bond market is completely impossible,” Hirano said. “Yet there are huge numbers of Japanese who think investing in stocks is dangerous. It’s really hard to bridge that gap.”

Hirano laments the public focus on short-term losses and gains. For a fund that invests with a 100-year time frame, “to swing between sorrow and joy over quarterly results is nonsense.”

Compared with his outspoken predecessor Mizuno, the fund’s current chief investment officer Eiji Ueda prefers to operate from the background. Despite being in the office for more than a year, Ueda hasn’t spoken publicly yet. Hirano shed some light on how Ueda, a former bond trader at Goldman Sachs Group Inc., prefers to operate.

“Ueda is building on the foundation of the previous system, taking it a step further and building a precise risk management and elaborate rebalancing strategy,” he said, adding Ueda’s key target was how much GPIF management can outperform the composite benchmark.

With FTSE Russell set to add Chinese debt to its benchmark global bond index from October, the GPIF is facing a dilemma over whether to put its money into China’s sovereign debt.

“The issue could have political implications,” he said. “The GPIF isn’t supposed to consider political agendas, just think of the risk-weighted return, but politics can influence the market. The GPIF is facing a difficult decision.”