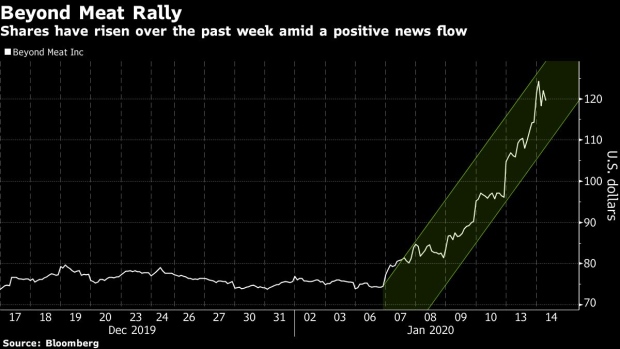 (Bloomberg) -- Beyond Meat Inc. rose Tuesday after a report that the faux-meat maker hopes to expand into the Chinese mainland market this year added to the stock’s recent momentum.

The company’s Executive Chairman Seth Goldman said “we haven’t announced anything, but we are expected to do something this year,” according to China’s Xinhua news agency. His comment came Monday on the sidelines of the National Retail Federation’s 2020 expo, Xinhua said.

Shares of Beyond Meat climbed as much as 18% to the highest since October, before paring gains. The stock remains on pace for its fourth straight advance, the longest such streak since November.

The comments on a China expansion add fuel to the fire after the stock gained last week amid a Reuters report that Impossible Foods is no longer seeking a deal with McDonald’s Corp. and news that Beyond Meat and the fast-food chain were expanding their partnership in Canada.

On top of that, BlackRock Inc. Chief Executive Officer Larry Fink said in his annual letter to U.S. corporate executives on Tuesday that climate change will upend global finance sooner than they might think.

Fink’s comments “would indicate that firms like Beyond Meat would get more investment,” said Morningstar analyst Rebecca Scheuneman. But among the factors that could be driving Tuesday’s rally, it could be ”any or all of the above.“

Both Beyond Meat and closely held rival Impossible Foods have been eyeing China, which represents about 27% of the world’s meat consumption by volume. In October, Beyond CEO Ethan Brown said in an interview with Bloomberg that “we want to be as aggressive as we can.”

Xinhua also cited Goldman as saying the company, which has a centralized production facility in Missouri, is looking to build such plants in other countries and source locally.

The goal would be to “take a crop from every continent where we produce and grow the crops and produce the product in that continent,” Goldman told Xinhua.

“With 40% of meat being consumed in Asia, we are very focused on ensuring we can enter markets like China as soon as possible,” Lee said.

--With assistance from Andres Guerra Luz.

To contact the reporter on this story: Gregory Calderone in New York at gcalderone7@bloomberg.net

To contact the editors responsible for this story: Catherine Larkin at clarkin4@bloomberg.net, Will Daley