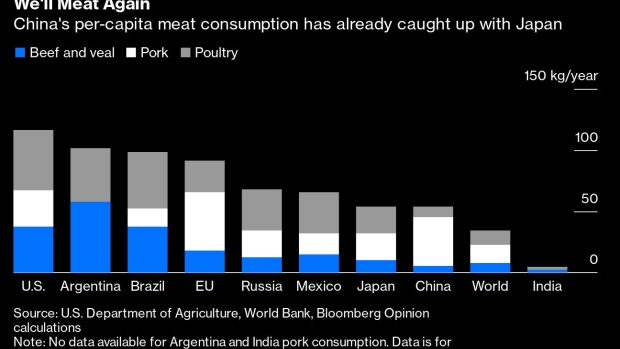 (Bloomberg Opinion) -- You wouldn’t try to sell coal to Newcastle. So how would you rate your chances of peddling meat substitutes to the country that invented tofu?

It’s not hard to see why this was a necessary step. For decades, China has consumed about half the world’s pork. Even in the wake of an epidemic of African swine fever, which caused the domestic herd to shrink by nearly a third, pig meat still accounted for about two-thirds of China’s livestock consumption in 2019. (In a good year, it’s more like three-quarters.)

That makes a pork substitute absolutely necessary for the factories Beyond Meat plans to open near Shanghai. Despite decades of relatively rapid growth in China, the company's core imitated product, beef, isn’t consumed at anything like the rates in other countries — particularly relative to the one-time ranching cultures of the Americas.

If Beyond Meat wants to get in on vegetarianism among China’s affluent classes, it needs a product to match the market. Hong Kong’s OmniFoods is already widely distributing a ground pork substitute in the city, and mainland player Whole Perfect Food sells vegan bacon. Startups Zhenmeat and Starfield Food Science & Technology, meanwhile, have sought funding to develop their own meat-substitute products.

The real problem is not those young rivals, though, but a much older challenger. Tofu and its soy-based relatives have been a central feature of Chinese cuisine since the first millennium. In the Suiyuan Shidan, an 18th-century cookbook, there are as many recipes for tofu skin-based imitation poultry as there are for beef, which at the time was an exotic food grouped alongside curiosities like palm civet and water deer.

That hasn’t changed all that much, even today. Studies of around 136,000 Shanghainese men and women in the late 1990s and early 2000s found that soy-based foods comprised about 20% of their diet, roughly twice as large a share as meat products.

You might have expected that mix to change dramatically as China has grown more affluent over the past few decades, but shifts have been surprisingly modest. While poultry and beef consumption increased at a rapid clip in the early 2000s, that pace has slowed over the past decade. The 75 million tons of meat that China consumed in 2017 before swine fever took hold was just slightly less than the 76 million tons eaten five years earlier.

Problems in the food chain can cause more dramatic declines. The 10.4 million metric-ton decline in pork consumption in 2018 amid the African swine fever epidemic was sizeable, but scarcely the only such event in recent Chinese history. In 2011, when a government crackdown on the food additive clenbuterol led to one of the country’s perennial food safety scandals, pork consumption fell by 7.3 million tons. Similar dips occurred after a 2005 streptococcus outbreak.

The slowing growth rate of carnivory suggests that, as we’ve argued in the past, the country’s hunger for meat may be nearly sated. Chinese people already consume beef, for instance, in similar quantities to people in Taiwan, Singapore, and Japan. It’s far from certain that appetites will converge on the higher levels seen in some western countries as incomes rise.

China’s official dietary guidelines to halve meat consumption and a more recent campaign against food waste are further signs that the challenges of feeding 1.4 billion people are starting to butt up against hard limits. That’s especially the case at a time when the government is growing more worried about its import dependence on foreign powers.

The selling proposition for meat substitutes in countries like the U.S., Australia, Canada and New Zealand is relatively straightforward. Beef consumption has already been in decline for decades, driven initially by health concerns and the sheer volumes that locals traditionally ate. Many of those who become vegetarians or vegans still have fond memories of the meaty flavors they grew up with. Selling a realistic plant-based alternative is just a way to take advantage of a trend that’s already well underway.

In China, it’s more complicated. The country has about 50 million vegetarians, according to official newswire Xinhua, but meat consumption has risen so fast since the 1980s that fewer will have the atavistic hankering for animal products suffered by their peers elsewhere. On top of that, there’s a rich domestic vegetarian tradition to draw on that’s more affordable than the current wave of imitation muscle. Plant-based pork may yet find a place in China — but this country started moving beyond meat hundreds of years ago.