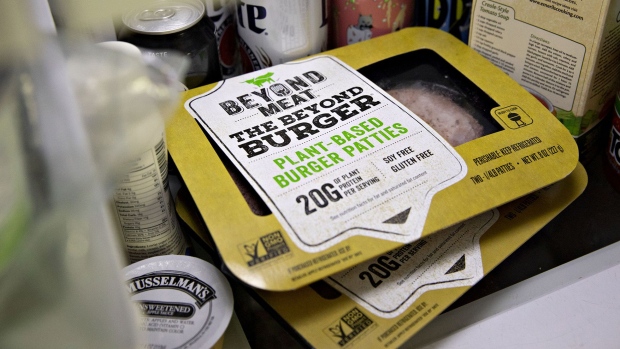 Beyond Meat Inc. (BYND.O) tumbled 10 per cent in pre-market trading after inside shareholders priced a secondary offering at US$160 per share Wednesday night, handing early investors a slice of profits and adding to company coffers as it looks to fund expanded production in an increasingly crowded vegan marketplace.

The offering price represents an 18.58 per cent discount to Wednesday’s close. Shareholders locked in the gain after Beyond Meat’s nearly 700 per cent rally in this year’s best-performing IPO, selling 3 million of the 3.25 million shares sold, according to a statement confirming an earlier report by Bloomberg. That amounts to proceeds of US$480 million for holders, who sold off small portions of their stakes.

The company raised about US$40 million from its portion of the deal.

The transaction lets early investors such as Kleiner Perkins and Obvious Ventures and executives including Chief Executive Officer Ethan Brown take profits after an almost eight-fold gain since the stock’s debut. News of the offering, announced alongside better-than-expected earnings on Monday, sent shares tumbling and put a damper on what had been another upbeat earnings report from Beyond Meat, with sales surpassing analysts’ estimates. Shares bounced back on Wednesday, erasing some of Tuesday’s 12 per cent plunge, to trade to US$196.51 each.

Beyond Meat on Monday boosted its sales guidance as it attracts a growing list of restaurant clients for its plant-based burgers and sausages. The El Segundo, California-based company now expects at least US$240 million in revenue this year -- almost triple 2018’s total.

The most recent partner is Dunkin’ Brands Group Inc., which started testing a Beyond Sausage breakfast sandwich in Manhattan before a planned nationwide rollout. Beyond Meat products are also on the menu at Tim Hortons, TGI Fridays, Carl’s Jr. and Del Taco.

Restaurants are racing to line up non-meat menu items as Americans warm to patties and sausages that mimic the flavors and textures of the real thing but are made with plants. Meat eaters are also increasingly trying out the products.

The rapid growth -- and the potential for much more -- has captured investors’ attention, pushing its market value to US$12 billion in a meteoric rally since its IPO, when it first priced shares at US$25 apiece to raise US$277 million. But the exuberance has drawn its share of detractors as well. Short sellers betting the stock will fall have borrowed about 45% of the company’s float, amassing bets totaling US$1.02 billion of market value, according to financial analytics firm S3 Partners.

--With assistance from Crystal Kim and Jonathan Roeder.