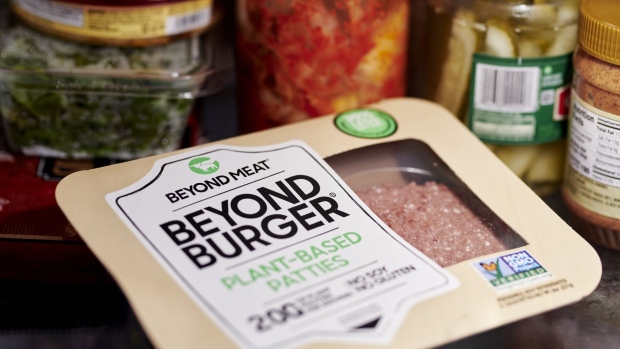 A package of Beyond Meat burger patties arranged in the Brooklyn borough of New York, U.S., on Friday, Nov. 6, 2020. Beyond Meat Inc. has been able to shift to greater sales at retail outlets as the coronavirus pandemic affected restaurant sales, though the split between retail and foodservice may not rebalance until at least mid-2021. Photographer: Gabby Jones/Bloomberg , Bloomberg

(Bloomberg) -- Beyond Meat Inc. shares fell as much as 15% after the maker of plant-based meats reduced its revenue guidance for the third quarter, citing an array of factors that hurt performance.

The company expects revenue of about $106 million, down from its previous forecast of $120 million to $140 million, it said Friday. Analysts were looking for $134.3 million, according to data compiled by Bloomberg.

Beyond cited reduced demand due to the Covid-19 delta variant, as well as “a decrease in retail orders that persisted longer than expected from a Canadian distributor coinciding with the reopening of restaurants.” The El Segundo, California-based company also pointed to delays in expanding its distribution, which it attributed to labor shortages at its customers.

The stock fell as low as $91.99 in premarket trading. Beyond shares were down 13% this year through Thursday, compared with a 21% rise for the S&P 500 index.