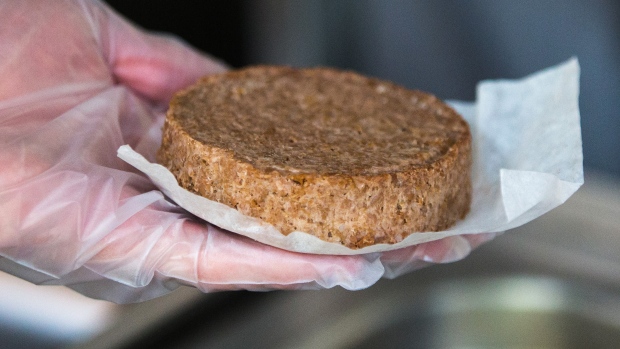 A chef handles an uncooked Beyond Meat Inc. plant-based burger patty in the kitchen inside a TGI Friday's Inc. restaurant in Moscow, Russia, Sept. 27, 2019. Bloomberg/Andrey Rudakov

Beyond Meat Inc., the faux-meat maker that’s become a Wall Street darling, is announcing one of its biggest restaurant roll outs yet.

A sandwich featuring the company’s plant-based sausage will arrive in more than 9,000 U.S. Dunkin’ restaurants beginning on Nov. 6, the companies said Monday. The nationwide launch follows a successful trial run in Manhattan’s 163 locations over the past three months.

The plan was always to go national with the menu item, but the U.S. expansion wasn’t originally planned until January 2020. Dunkin’ Brands Group Inc. said it accelerated the wider launch after New York sales were more than double what it had forecast, with the item becoming its No. 2 selling sandwich in Manhattan -- surpassed only by bacon, egg and cheese on a bagel.

Beyond Meat shares gained as much as 3.3 per cent in New York.

Restaurants are racing to line up non-meat menu items as Americans warm to patties and sausages that mimic the flavors and textures of the real thing but are made with plants. Beyond Meat, which has seen its stock rally more than 300 per cent since its May public offering, is already present on menus at TGI Fridays nationwide and in regional fast-food chains like Carl’s Jr. and Del Taco.

Its main competitor, Impossible Foods, snagged a big win earlier this year when its plant-based Whopper landed in some 7,000 U.S. Burger Kings. But the real prize — a spot on McDonald’s Corp.’s U.S. menu — is still anyone’s game. The fast-food giant selected Beyond Meat for a plant-based burger test in Canada but has yet to choose an alt-meat supplier of its roughly 14,000 locations in its home market.