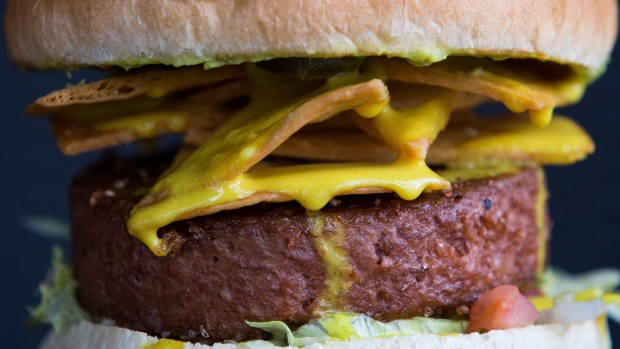 A 'my way' burger, made with a Beyond Meat Inc. plant-based burger patty, sits on the kitchen pass ready to serve inside a TGI Friday's Inc. restaurant in Moscow, Russia, on Friday, Sept. 27, 2019. McDonald’s Corp. has selected Beyond Meat’s faux-meat patties for a plant-based burger test in Canada. , Bloomberg

U.S. plant-based burger and sausage maker Beyond Meat Inc. is building two production facilities in China’s eastern province of Zhejiang in its biggest push yet to enter the Chinese market for alternative protein.

The facility, to be located in the Jiaxing Economic and Technological Development Zone that’s close to the megacity of Shanghai, is expected to start trial production “within months, with full scale-production in early 2021,” according to a company statement Tuesday.

The move makes it the first foreign plant-based protein maker to establish a major production facility in China, the company said. It also gives Beyond Meat an edge over rival Impossible Foods Inc., whose “magic ingredient” of heme -- made from genetically modified yeast -- requires government approval in China.

Both are hungrily eyeing the Asian giant, which accounts for 27 per cent of the world’s meat consumption by volume, especially now that the coronavirus pandemic has essentially destroyed restaurant sales in the U.S. Other plant-based alternatives makers already have a Chinese presence, including Oatly AB and Eat JUST Inc., a vegan egg company.

The recent outbreak of African Swine Fever in China has driven up the price of pork and primed consumers for alternatives, and if the American companies can win over even a small fraction of the country’s 1.4 billion people, the opportunity is massive.

Beyond Meat already has deals for its products to be sold in Starbucks, KFC and Pizza Hut outlets in China. The world’s second-largest economy will be a production and research and development center for the company, as well as a “major market in the years to come,” said the statement.