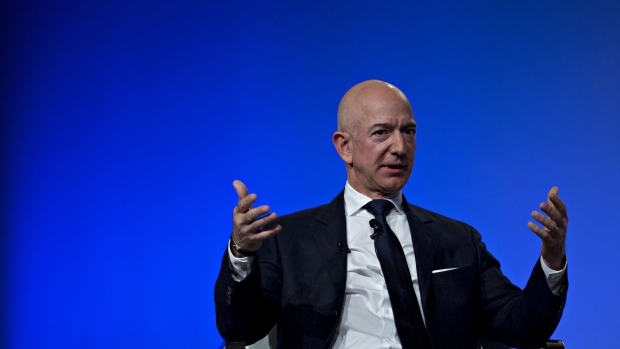 Jeff Bezos, founder and chief executive officer of Amazon.com Inc., speaks during a discussion at the Air Force Association's Air, Space and Cyber Conference in National Harbor, Maryland, U.S., on Wednesday, Sept. 19, 2018. Amazon is considering a plan to open as many as 3,000 new AmazonGo cashierless stores in the next few years, according to people familiar with matter, an aggressive and costly expansion that would threaten convenience chains. Photographer: Andrew Harrer/Bloomberg , Bloomberg

Billionaires have always traveled in a different orbit than the rest of us. Nicer things, more power, rocket-launching stations. But 2020 threw that gulf into stark relief.
While much of the world grappled with soaring unemployment and plunging growth, the 0.001 per cent benefited from unprecedented wealth creation.

The world’s 500 richest people added US$1.8 trillion to their combined net worth this year and are now worth US$7.6 trillion, according to the Bloomberg Billionaires Index. Equivalent to a 31 per cent increase, it’s the biggest annual gain in the eight-year history of the index and a US$3 trillion jump from the market’s nadir in March.

The gains were disproportionately at the top, where five individuals now hold fortunes in excess of US$100 billion and another 20 are worth at least US$50 billion.

Combined the two gained about US$217 billion in 12 months, enough to send US$2,000 checks to more than 100 million Americans.

The father and son behind used car site Carvana.com became one of the wealthiest families on the planet, while the Winklevoss twins can call themselves billionaires again thanks to resurgent interest in cryptocurrencies.

Exuberant markets and a spate of public offerings super-charged wealth creation in China, where the early COVID crisis led to containment efforts more successful than most. The Chinese members of the index added US$569 billion to their fortunes, more than any country aside from the U.S.

Zhong Shanshan, a low-profile water-bottle tycoon nicknamed the “Lone Wolf,” became Asia’s richest person after the initial offerings of two of his companies helped boost his net worth by US$70.9 billion. He supplanted Mukesh Ambani, who has started to transform his conglomerate into an e-commerce and tech colossus.

Not all of the region’s billionaires thrived. Jack Ma started the year as China’s wealthiest individual, a position he was poised to solidify with growing sales at his e-commerce giant Alibaba Group Holding Ltd. and the impending listing of Ant Group Co. Then Ant’s IPO collapsed shortly after Ma’s pointed critique of Chinese regulators, and his net worth slipped, along with some of the country’s other tech titans.

The Chinese government cast a long shadow over tycoons in neighboring Hong Kong as well. After years of big gains, the wealth of many of the administrative region’s richest people was hobbled by tumbling property prices and uncertainty over China’s controversial national security law.

Globally, runaway gains by the super-rich have added fuel to populist movements and revived interest in hiking taxes. In Germany, the U.K. and certain states, such as California and Washington, lawmakers, activists and academics are pushing to implement wealth taxes to rebuild government coffers drained by the pandemic.

“Surging billionaire wealth hits a painful nerve for the millions of people who have lost loved ones and experienced declines in their health, wealth, and livelihoods,” said Chuck Collins, director of the Program on Inequality and the Common Good at the Institute for Policy Studies. “Worse, it undermines any sense that we are `in this together’ — the solidarity required to weather the difficult months ahead.”

But this year’s crises also underscored the role billionaire capital and the companies they control can fill when government response falls short. Whether it was donating personal protective equipment, funding medical research and social justice causes or advocating for vaccines, the ultra-rich, for better or worse, played a role in responding to the year’s woes.

Few outside of biotech had heard of Moderna Inc. or BioNTech SE at the beginning of the year. Now they’re household names as the revolutionary messenger RNA-based shots begin their crucial distribution around the globe. French native Stephane Bancel, Chief Executive Officer of Moderna, became a billionaire in the spring after the Cambridge, Massachusetts-based company emerged as an early frontrunner in the vaccine sprint.

German scientist Ugur Sahin, the son of Turkish immigrants, honed in on COVID back in January. With wife Ozlem Tureci, BioNTech’s Chief Medical Officer, they led the development of a vaccine that was the first to be authorized for use in the U.S. Sahin said his focus has always been science, not entrepreneurship let alone wealth, but the value of his stake has made him worth US$3.6 billion.

Meanwhile, MacKenzie Scott, ex-wife of Jeff Bezos, redefined what rich-person philanthropy can be, giving away almost US$6 billion in a few months. Despite donating money at an unprecedented pace, she ended 2020 significantly richer than at the start.

“This pandemic has been a wrecking ball in the lives of Americans already struggling,” Scott wrote in a post on Medium. “Economic losses and health outcomes alike have been worse for women, for people of color and for people living in poverty. Meanwhile, it has substantially increased the wealth of billionaires.”