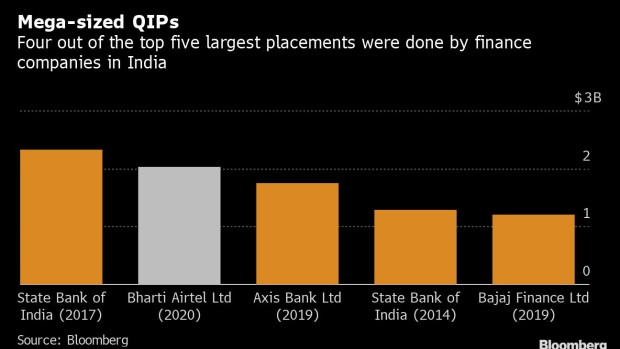 Advertising banners for Bharti Airtel Ltd. are displayed on a wall behind a roadside mobile phone sim card vendor in Hyderabad, India, on Friday, March 15, 2019. The success of India's $5 billion swap auction on March 26 will decide whether it will become a popular instrument in the central bank's liquidity tool box. The move will bulk up the central bank's foreign-exchange reserves while injecting cash into the banking system to ease the liquidity crunch typically seen before the fiscal year-end in March. Photographer: Dhiraj Singh/Bloomberg , Bloomberg

(Bloomberg) -- Bharti Airtel Ltd., an Indian wireless carrier, raised $3 billion from the sale of shares and bonds to help pay government fees falling due in about a week.

The New Delhi-based company, which was ordered by the nation’s top court to pay $3 billion in airwaves and license fees, raised $2 billion from a so-called qualified institutional placement, according to a statement on Wednesday. It also collected $1 billion from the issuance of convertible bonds.

In its October verdict, the Supreme Court of India told many operators to pay as much as $13 billion of dues accumulated over years, ruling on a dispute between the government and the companies over the calculation of fees. While the court is considering appeals against that order, the carriers meanwhile have time until Jan. 24 to make the payment.

The $2 billion QIP placement, which is done relatively faster because it doesn’t allow retail participation, is the second-largest deal on record of its kind, after State Bank of India’s $2.3 billion in 2017, according to data compiled by Bloomberg.

Against fierce competition from Reliance Jio Infocomm Ltd., Indian telecommunications companies have been struggling in the past few years and Bharti Airtel is no exception. The firm, once India’s No. 1 carrier, has slipped to the third position and reported a record loss in the quarter ended September because of a one-time charge taken for the payment.

Rival Vodafone Idea Ltd. was slapped with a $4 billion bill.

--With assistance from Jeanette Rodrigues.

To contact the reporter on this story: Zhen Hao Toh in Singapore at ztoh4@bloomberg.net

To contact the editors responsible for this story: Lianting Tu at ltu4@bloomberg.net, Sam Nagarajan