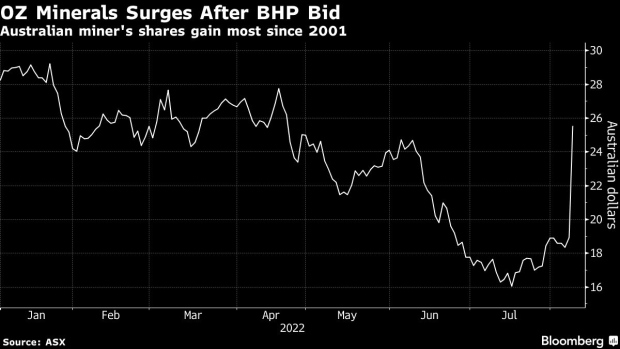 (Bloomberg) -- BHP Group was rebuffed in a takeover approach for OZ Minerals Ltd. as the world’s top miner returns to major dealmaking in a hunt for copper and nickel assets vital to the shift to electric transport and clean energy.

Melbourne-based BHP’s offer valued the target at about A$8.4 billion ($5.8 billion), according to Bloomberg calculations. That is too low for a company with significant growth prospects in coveted commodities, Adelaide-based OZ Minerals said Monday in a statement.

The proposal marks a return to multibillion dollar offers for BHP after years of caution following the industry’s series of failed acquisitions. The miner’s last major transaction was $12.1 billion for Petrohawk Energy Corp. in 2011, though it has since made smaller moves for copper and nickel assets.

Read more: Vast Fortunes Will Be Made in Obscure Metals Behind Clean Power

“The offer is compelling, and aligns with BHP’s strategy of increasing exposure toward future facing commodities,” RBC Capital Markets analyst Kaan Peker said in a note. BHP has the capacity to fund development of OZ Minerals’ suite of growth projects at a time when a weaker copper price is adding risks for the smaller producer, he said.

BHP, which this year hived off its oil and gas assets, is seeking to add more growth in commodities tied to trends including low-emissions transport and clean energy, particularly copper needed for renewables and nickel required for lithium-ion batteries. The producer is also pouring billions of dollars into a giant new potash mine in Canada to enter the fertilizer sector.

“We have a unique set of copper and nickel assets, all with strong long-term growth potential in quality locations,” OZ Minerals Chief Executive Officer Andrew Cole said in the statement. “We are mining minerals that are in strong demand particularly for the global electrification and decarbonization thematic.”

OZ Minerals operates copper mines in South Australia, where BHP has its giant Olympic Dam operation and Oak Dam prospect, and also has nickel developments in Western Australia and projects in Brazil.

Cole, appointed in late 2014, has transformed OZ Minerals “into arguably one of the best copper companies in Australia and the world, if not the best,” Peter O’Connor, an analyst at Sydney-based Shaw & Partners Ltd. said in a note. “This M&A foray is far from over.”

BHP has accumulated an interest OZ Minerals, though the stake is less than 5%, the smaller company said in its statement. The target has appointed Macquarie Capital and Greenhill & Co. as financial advisers, and Gilbert + Tobin as legal adviser, OZ Minerals said.

The proposal “represents compelling value and certainty for OZ Minerals shareholders,” BHP’s CEO Mike Henry said in a statement, and the producer is disappointed the target’s board “has indicated that it is not willing to entertain our compelling offer or provide us with access to due diligence in relation to our proposal.”