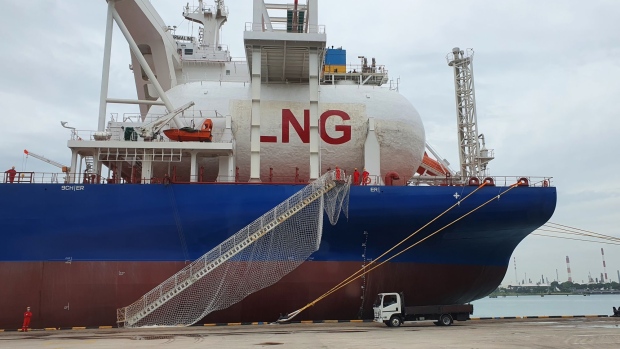 (Bloomberg) -- One of the world’s first bulk ships to run on liquefied natural gas will deliver its first cargo of iron ore to Northeast Asia later this month, according to charterer BHP Group Ltd.

The Mount Tourmaline is currently being fueled with the super-chilled gas in Singapore and will sail this week to Australia to pick up an iron ore cargo at Port Hedland, said Rashpal Bhatti, a vice president at BHP, at an event on Monday to launch the ship.

A company spokesman declined to comment on the specific destination.

The Australian commodities producer, which is also the world’s largest bulk charterer, seeks to reduce its emissions from transporting iron ore to steel mills in Northeast Asia by 40% in 2030. LNG-fueled vessels are forecast to help BHP curb greenhouse gas emissions by 30% on a per-voyage basis compared with a conventional-fueled voyage between Western Australia and China.

The Mount Tourmaline is one of five LNG-powered vessels that the company is planning to charter from Eastern Pacific Shipping. While that number is 4% of the 120 ships that typically load every month from Port Hedland, the move will prepare the company to transition to bio-LNG fuel and eventually ammonia in the future, said Bhatti.

Some ports may also require ships to bunker Very Low-Sulfur Fuel Oil instead of LNG. The Mount Tourmaline can burn both fuel types.

“We feel that this vessel provides us with a lot of optionality,” said Bhatti. “We can go from LNG to bio-LNG with the same engine and tanks, but with a little bit of capital expenditure she can burn ammonia.”