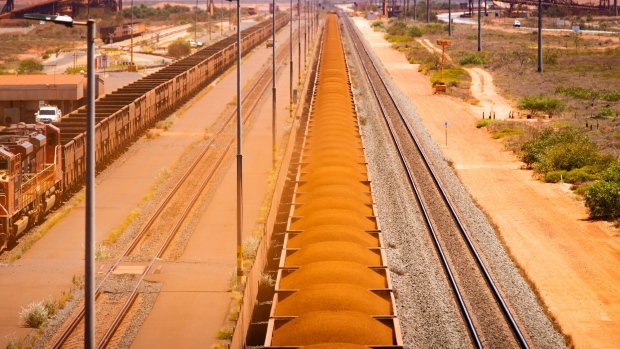 A freight train carrying iron ore travels along a rail track towards Port Hedland, Australia, on Monday, March 18, 2019. A two-day drive from the nearest big city, Perth, Port Hedland is the nexus of Australia’s iron-ore industry, the terminus of one of Australia’s longest private railways that hauls ore about 400 kilometers (250 miles) from the mines of BHP Group and Fortescue Metals Group Ltd. The line ran a record-breaking test train weighing almost 100,000 tons that was more than 7 kilometers long in 2001, and even normal trains haul up to 250 wagons of ore. Photographer: Ian Waldie/Bloomberg , Bloomberg

(Bloomberg) -- BHP Group said it will target net-zero greenhouse gas emissions from its direct suppliers and the shipment of its products by 2050, but stopped short of extending it to steelmaking customers due to what it describes as the technical challenges facing the industry.

The Melbourne-based company’s Scope 3 emissions -- which include procurement and shipping as well as end-user emissions -- were 402.5 million tons of carbon dioxide-equivalent in the year ended June 30, BHP said in a climate plan announced Tuesday. That’s more than the total emissions of the U.K. and account for 96% of its overall emissions.

While steel is an important component in many of the products driving the decarbonization process, its production accounts for as much as 10% of global greenhouse gas emissions -- and about three quarters of BHP’s Scope 3 emissions. The company says it’s working with industry giants including Japan’s JFE Steel and China’s HBIS Group on ways to reduce manufacturers’ carbon footprint.

“There are a number of global uncertainties that must be reckoned with in terms of achieving net zero in steel,” BHP said in the report, including the timeline for finding economical solutions to decarbonize the steel-making process. While some steel producers are trialling the use of hydrogen as a cleaner alternative to coal, the company has said the technology faces headwinds in terms of cost and storage.

Both BHP and Rio Tinto Group, the world’s top iron ore exporter, are targeting a 30% reduction in the emissions intensity of its steel customers over the next decade. Fortescue Metals Group Ltd. has said it will announce targets for Scope 3 emissions later this month.

BHP’s Scope 3 goals come with caveats. Its net-zero target for direct suppliers is subject to the availability of carbon neutral goods and services that meet the miner’s requirements. Its shipping pledge depends on the widespread availability of carbon-neutral solutions including low or zero emissions marine fuels as well as technology on board suitable ships.

While emissions from BHP’s operations rose 2% in the past year, the company said it remained on track to reach its 30% reduction target by 2030. Solar and wind power supply deals were already in place across a range of its mine assets which would lower those emissions in the years ahead, the company said.

BHP is looking to clean up its portfolio by exiting thermal coal and increasing its exposure to what Chief Executive Officer Mike Henry calls “future-facing commodities”. They include metals such as copper and nickel -- key materials for the batteries and wiring that are key to the clean-energy transition.