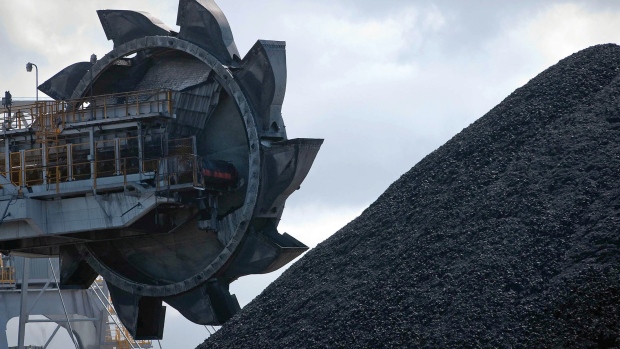 Coal is stockpiled in preparation for loading onto ships for export at the Newcastle Coal Terminal in Newcastle, north of Sydney, Australia, on Wednesday, Sept. 8, 2010. BHP Billiton Ltd. and Rio Tinto Group declined in Sydney trading after Australian Treasurer Wayne Swan signaled the final terms of the government\'s planned mining tax may depend on talks with independent lawmakers. Photographer: Ian Waldie/Bloomberg , Photographer: Ian Waldie/Bloomberg

(Bloomberg) -- BHP Group’s exit from thermal coal is looking less certain as record prices and shifting investor attitudes put the brakes on its planned retreat from the dirtiest fuel, according to people familiar with the matter.

The company has been planning its thermal coal exit for at least two years -- BHP has already sold a stake in the Cerrejon thermal coal mine in Colombia and is nearing a deal to sell some Australian coking coal mines.

But the process for offloading its Mt Arthur mine in Australia is stalling because coal’s rally has made the asset more valuable, and it’s no longer under as much pressure from some investors to sell, said the people, who asked not to be identified as the details are private. That’s giving BHP more room to consider its options for Mt Arthur and wait for better offers.

BHP and rivals including Anglo American Plc have looked to exit thermal coal under pressure from investors who weren’t comfortable with blue-chip names mining the dirtiest fuel. Yet that urgency has softened somewhat in the past year, with some activists now saying major miners are best placed to eventually close down operations responsibly themselves.

There “wasn’t any push toward becoming fossil-fuel free,” he said at a shareholder meeting. “It was simply a cold-eyed assessment on how those commodities fit with the BHP portfolio, how we saw the long-term value and the ability to compete for capital in the BHP portfolio.”

BHP has already rebuffed multiple offers for Mt Arthur, and with uncertainty around future liabilities, has yet to receive offers that match its valuation, the people familiar with the matter said.

BHP will also have its deal to exit Cerrejon in Colombia fresh in its mind. The timing of the sale agreement means that BHP and partner Anglo are essentially giving away their interests in the mine. While Glencore Plc agreed to pay $588 million this year to buy stakes from the two companies, it also took over cash flows for the rest of 2021. The recent surge in coal prices means those cash flows will likely more than cover the purchase cost.

Benchmark prices for thermal coal exported from Australia spiked to a record last month, though prices have pulled back as China rolls out measures to ease a supply crunch that’s contributed to power shortages.

BHP’s BMC metallurgical coal assets in Australia are the more attractive of the coal mines up for sale, and that process is ongoing, the people said.