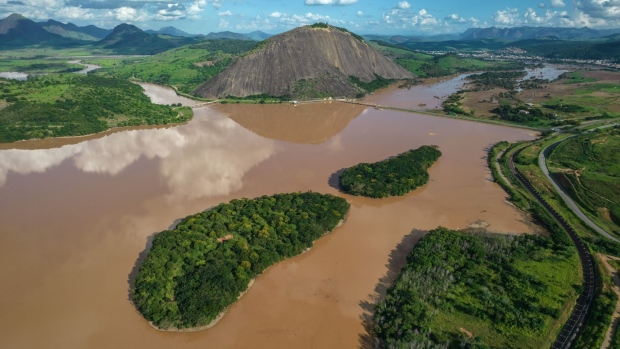 The River Doce near Resplendor, Minas Gerais state, Brazil, on Monday, Jan. 17, 2022. A 200,000-strong suit in the UK is demanding $7 billion in damages from Anglo-Australian mining giant BHP Group Ltd., which owns half of Samarco, the company that owned the dam that destroyed the indigenous Krenak land along the banks of the River Doce in Brazil's Minas Gerais state. , Bloomberg

(Bloomberg) -- BHP Group is willing to protect its joint venture in Samarco Mineracao SA, saying it sees room to negotiate with financial creditors in the Brazil miner’s debt restructuring.

“We’re absolutely committed to making sure that Samarco is reset to be the sustainable operation it always has been and should be again for the next few decades,” Simon Duncombe, vice president of BHP’s joint venture in Brazil, said in an interview. He denied any intention of walking away from the investment.

Samarco became unable to pay its 50 billion reais ($10.2 billion) debt after its waste dam collapsed in 2015, killing 19 people in Mariana, Minas Gerais. The firm halted production, and it took until December 2020 before it was able to partially restart operations.

BHP and Vale SA –- its partner in the joint venture with 50% stakes -- are supporting the plan filed Wednesday by two workers’ unions representing creditors form Samarco. However, BHP wants the right to vote on both alternative plans presented this week.

Bondholders presented a plan to take control of Samarco and slash the 24 billion reais ($4.9 billion) that Samarco said it owes to Vale and BHP to less than 960 million reais. It will compete with the plan filed by unions, which is a revised version of the Brazilian mining company’s debt-restructuring plan, with amendments.

The new Brazilian bankruptcy law allows creditors for the first time to present their own restructuring plans if the company’s plan is rejected, which happened about one month ago. Even being shareholders, Vale and BHP argue that they have no conflict of interest in the vote to decide on a plan proposed by other stakeholders, and are asking the court for the right to vote.

Duncombe sees “many more chapters to be written” in the restructuring saga started in April 2021. The new union proposal could attract votes from financial creditors outside the ad hoc group composed by 17 funds, including Oaktree Emerging Market Debt Fund LP, or even from the group, he said. It stipulates that bondholders could receive extraordinary payments if projections in the previous plan end up being too conservative.

There are also legal issues pending that will have to be faced by Samarco’s restructuring court. This gives time for more rounds of negotiation with the lenders.

Duncombe said that BHP is opened to “constructive discussions”, but is “absolutely willing” to deploy all legal measures necessary to protect Samarco.