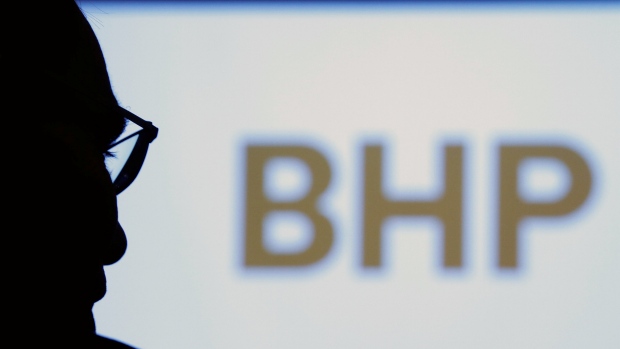 BHP Billiton Chief Executive Andrew Mackenzie is silhouetted against a screen projecting the company's logo at a round table meeting with journalists in Tokyo, Japan June 5, 2017. , REUTERS/Kim Kyung-Hoon/File photo

SYDNEY - BHP Billiton (BHP.AX), the world's largest miner, reported a surge in underlying full-year profits on Tuesday and said it would exit its underperforming U.S. shale oil and gas business, pleasing disgruntled shareholders who had called for a sale. The miner is also leaving the door open to selling its Jansen potash project in Saskatchewan.

The Anglo-Australian mining giant, which is under pressure from U.S. hedge fund Elliott Management to rethink its investment in oil and boost shareholder returns, was buoyed by a recovery in industrial commodities markets.

It generated more cash than even in some years of the mining boom, slashed net debt by nearly US$10 billion to US$16.3 billion and tripled its final dividend to US$0.43 a share.

Underlying profit of US$6.7 billion was below expectations for US$7.4 billion, according to Thomson Reuters I/B/E/S, but the market focused on the lower debt and the company's determination to exit U.S. shale, pushing its shares up 1.2 per cent.

"Net debt looks very impressive ... so the cash looks like it was applied to deleveraging versus extra dividends," Shaw and Partners analyst Peter O'Connor said.

BHP joined other miners who have boosted payouts in the current earnings season to reward shareholders amid a resurgence in commodity prices. Rio Tinto (RIO.AX) (RIO.L) and iron ore miner Fortescue Metals both paid record dividends, while Anglo American (AAL.L) reinstated its dividend.

Facing calls from some shareholders to dispose of the shale business it acquired at the height of the oil boom, the miner said it was "actively pursuing options to exit."

Chief Executive Andrew Mackenzie said the preference would be a small number of trade sales, but refused to give a timetable for quitting the business.

"We certainly have plenty of people interested in taking a look," Mackenzie said on a media call. "Our determination to exit means that we have other ways to exit that do not necessarily depend on ... a competitive set of willing buyers."

Fund managers including Elliott and Tribeca have been agitating for shale's divestment, along with higher shareholder returns and the elimination of dual-structured Australia and London stock listings.

Tribeca welcomed BHP's comments that shale was no longer core to the company.

"That was our approach. We didn't see it fitting strategically in BHP. We think they can realize value ahead of market expectations for the U.S. onshore business," Tribeca analyst James Eginton said.

Elliott, which last week raised its stake in the miner's London-listed arm to 5 per cent, was not immediately available to comment.

BHP Chairman Jac Nasser, who retires this year, has conceded the US$20 billion investment in shale six years ago was a mistake. Analysts have suggested the business could sell for about half that today.

"The shale acquisitions were poorly timed. We paid too much," Mackenzie said, adding that the company would be careful not to repeat the mistake by acquiring other assets at the top of commodities cycles.

"We have fundamentally changed the way we think about capital allocation, and the process that supports this, to make sure this discipline remains entrenched throughout the cycle," he said.

Meanwhile, the company also said it will not seek to sanction Jansen in 2018.

“Jansen will not proceed unless it passes our strict capital allocation tests. … We continue to thoroughly investigate all opportunities to further improve its economics,” said Chief Financial Officer Peter Beaven, noting those options include delaying the project, seeking a partner to help develop it, or potentially an outright sale “to crystalize value.”

BHP's underlying profit surged from US$1.2 billion a year ago as it benefited from a 32 per cent rise in iron ore pricing in fiscal 2017, owing to greater demand from Chinese steelmakers, which buy the bulk of its ore.

Prices for copper, oil, coal, nickel and other commodities were also up, with only liquefied natural gas weaker.

"Strong momentum will be carried into the 2018 financial year, with volume growth of 7 per cent and further productivity gains expected," Mackenzie said.

He reiterated BHP's commitment to its conventional petroleum business that includes operations in the Gulf of Mexico, saying there were opportunities to make a lot of money over the next couple of decades.

At the bottom line, BHP swung to an attributable profit of $5.89 billion from a record loss of US$6.39 billion a year ago.

In fiscal 2016, the bottom line was hit by US$7.7 billion in write-downs, with Mackenzie vowing they would not be repeated in 2017.