BHP Group and Mitsubishi Corp. will deploy electric pickup trucks and fast-charging units at an Australian coal mine to test technology that could aid the challenging task of cutting the sector’s greenhouse gas emissions.

The BHP Mitsubishi Alliance joint venture, Australia’s top coal producer, will initially use two of Canadian firm Miller Technology Inc.’s Relay trucks to transport workers at the Broadmeadow mine in Queensland. The vehicles -- which can be juiced up in about 20 minutes for a 10-hour shift -- will be backed by Tritium Pty Ltd. chargers that are adapted for use in harsh mining environments.

Miners are beginning to test out options to replace their vast diesel-powered fleets, including pickups and excavators, with zero-emissions alternatives, a step that could assist in curbing the industry’s sprawling climate footprint. Fortescue Metals Group Ltd. is adding hydrogen fuel-cell buses, while BHP, Vale SA and Rio Tinto Group have challenged suppliers to speed up development of large electric haul trucks.

Eliminating all combustion-engine vehicles at mines would require major investment and only tackle a portion of their pollution. Use of diesel, including by mining equipment, accounts for about 40 per cent of BHP’s so-called scope 1 and 2 greenhouse gas emissions, the company said in its most recent annual climate report. 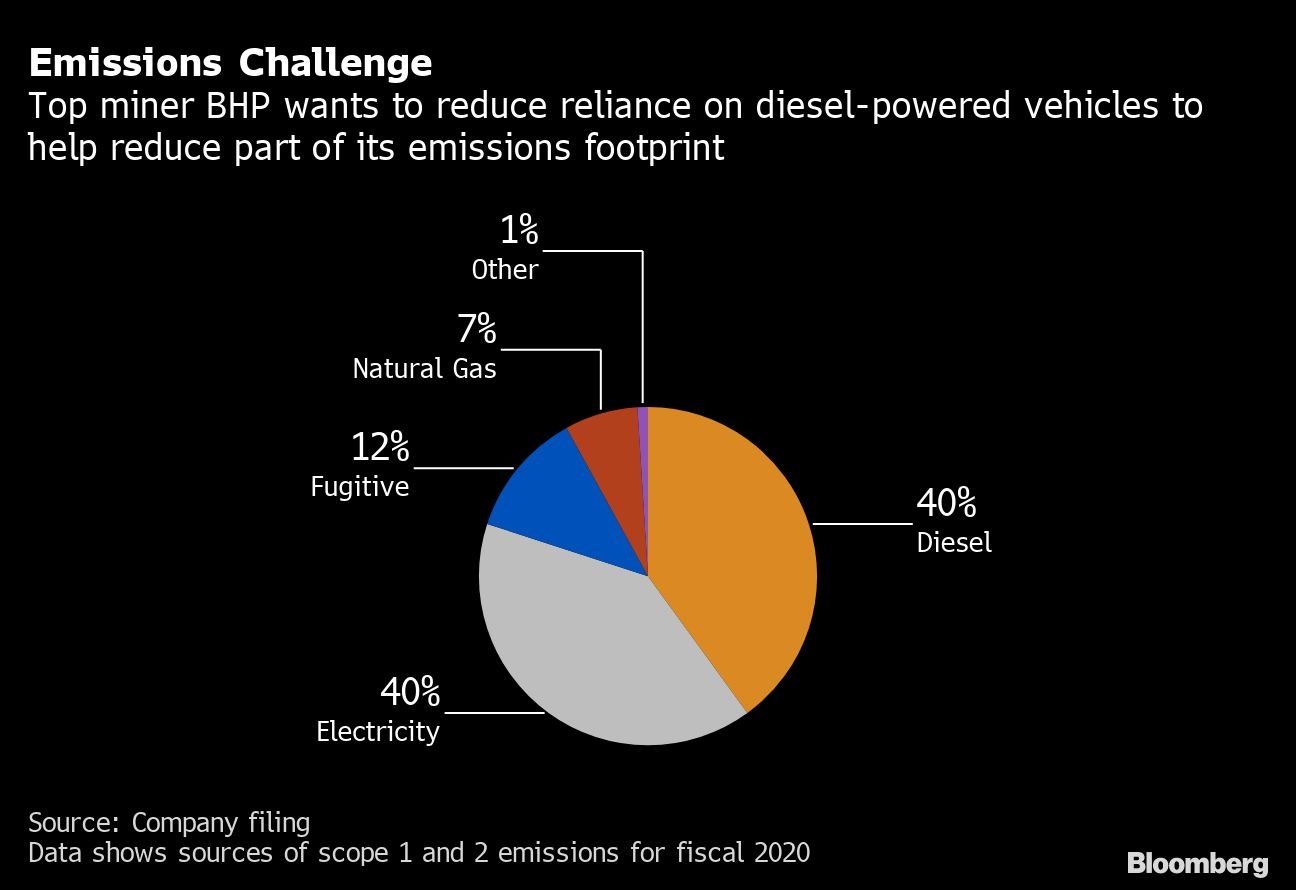 “The new electric transporters are a major step toward safer and more sustainable underground mining,” BMA President James Palmer said in a statement. The Relay trucks will replace diesel vehicles at the mine, and BMA plans a broader fleet replacement program that will eventually retire its entire diesel fleet.

Brisbane-based charger manufacturer Tritium, which in May reached an agreement to go public via a merger with a special purpose acquisition company, sees further opportunities to supply charging equipment to miners.

The industry will need “charging technology that is sealed to protect against sediment, dust and moisture, and rated to operate in harsh conditions,” Jane Hunter, Tritium’s chief executive officer, said in a statement.

BHP is seeking to lower greenhouse gas emissions from its own operations -- a small fraction of the total -- by almost a third by 2030 and to zero by 2050. The company last week agreed to split off its oil and gas unit to accelerate a retreat from fossil fuels, and is working with customers to reduce emissions.