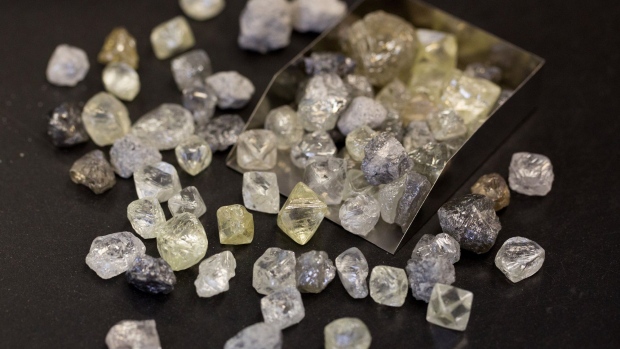 A collection of rough diamonds sit on a sorting table during processing at the United Selling Organisation (USO) of Alrosa PJSC sorting center in Moscow, Russia, on Tuesday, Feb. 12, 2019. , Bloomberg

CALGARY -- The owner of the Ekati Diamond Mine in the Northwest Territories says it plans to return the suspended project to full operating status after accepting a "stalking horse bid" by an affiliated buyer to allow it to exit court protection from creditors.

The bid is subject to a number of conditions, including approval by the court and reaching agreement with the N.W.T. government on security for reclamation obligations.

Dominion says the return to full operations at Ekati would occur after completion of the transaction, expected Nov. 7, as well as a successful recovery of global diamond sales markets.

Dominion's 40 per cent stake in the Diavik mine operated by rival Rio Tinto, located near Ekati about 300 kilometres northeast of Yellowknife, is not included in the deal.

Dominion is one of the two largest non-governmental employers in the N.W.T., with about 40 per cent of its 634 Canadian employees being northern residents and 60 per cent of those people being Indigenous. It also employed 425 contract workers in 2019.

Operations at Ekati were suspended in March to prevent spread of the COVID-19 pandemic.

The virus's negative impact on diamond transport and marketing was also cited by the company in its court filing for Companies' Creditors Arrangement Act protection in April.