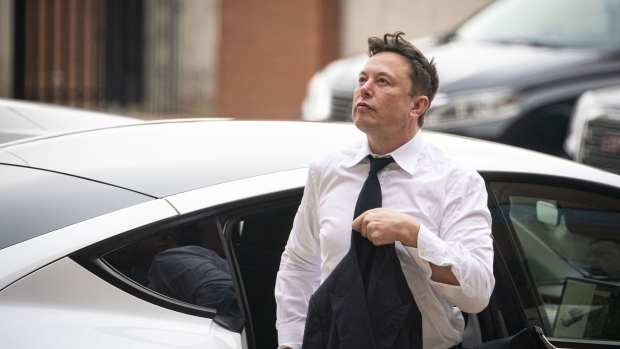 Elon Musk, chief executive officer of Tesla Inc., arrives at court during the SolarCity trial in Wilmington, Delaware, U.S., on Tuesday, July 13, 2021. Musk was cool but combative as he testified in a Delaware courtroom that Tesla's more than $2 billion acquisition of SolarCity in 2016 wasn't a bailout of the struggling solar provider. , Photographer: Al Drago/Bloomberg

“None of this is personal,” Raimondo said in an interview Thursday with CNBC. “These issues are way too important for anyone to have, you know, feelings hurt. Like - let’s just do the work. And as I said, anyone who has good ideas or is willing to help us, absolutely we want the help.”

Raimondo said that she believed Tesla had better navigated the chip shortage that has badly impacted auto manufacturing because of its origins as a technology company, while traditional Detroit automakers were still “learning quickly” about how to manage semiconductor supply chains.

The Commerce Secretary also downplayed animosity between Biden and Musk, saying she did not know of a policy within the administration that would preclude her from soliciting advice from Tesla.

Musk in recent weeks has tweeted his frustration with Biden over White House events highlighting electric vehicle efforts by companies like General Motors Co. and the Ford Motor Co.

Biden’s reluctance to recognize Tesla is rooted in Musk’s opposition to autoworker unions, a person familiar with the president’s thinking told Bloomberg.