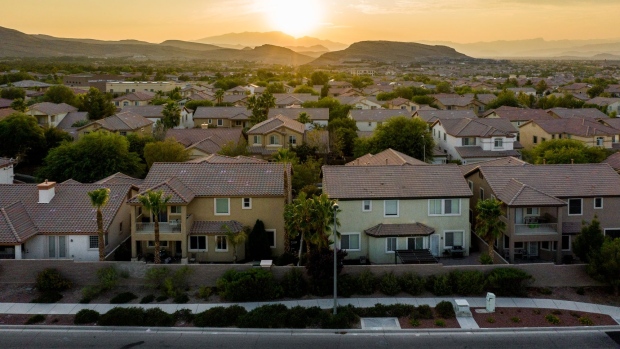 Homes in the Southern Highlands master-planned community are seen in this aerial photograph taken over Las Vegas, Nevada, U.S., on Thursday, Sept. 17, 2020. Nowhere is the widening gap between real estate and the real economy more apparent than in Las Vegas, where tourism is in ruins, wages are plunging and home prices just keep rocketing higher. Photographer: Roger Kisby/Bloomberg , Bloomberg

The US Federal Reserve, which meets this week to decide on interest rates, has helped to cool the overheated housing market even though inflation across the country is still “uncomfortably high,” White House economic adviser Jared Bernstein said.

The Fed is on track to raise interest rates by 75 basis points for a third consecutive meeting on Wednesday, after economic data over the past few weeks showed inflation remains widespread and stubbornly high. The jump in borrowing costs have boosted mortgage rates past 6% for the first time since 2008, slamming the housing market.

“We know that the Federal Reserve is in a hiking cycle to dampen those inflationary pressures, as they should be,” Bernstein said on “Fox News Sunday.” “We know that’s cooling off an overheated housing market.”

Bernstein pointed to efforts by President Joe Biden’s administration to rein in rising prices, saying the release of strategic oil reserves has helped bring down gas prices by $1.34 since a peak in June.

That decline is “providing some much needed breathing room to families,” Bernstein said. But “prices remain uncomfortably high. We’ve got a lot more work to do,” he said.