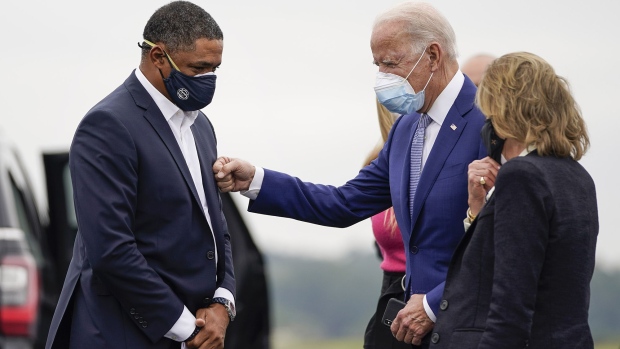 Representative Cedric Richmond, a Democrat from Louisiana, speaks during a news conference on Capitol Hill in Washington, D.C., U.S., on Wednesday, July 1, 2020. Efforts by Congress to limit the types of military equipment the Defense Department can transfer to law enforcement departments is unlikely to touch an even bigger source of advanced weapons accessible to civilian police. , Bloomberg

(Bloomberg) -- As President Joe Biden seeks to address racial inequities across the U.S., he’s turned to former congressman Cedric Richmond to help keep a promise to end discriminatory practices ranging from housing to voting rights -- a task complicated by the risk of alienating Republicans whose support is needed on key legislative priorities.

Richmond, a Louisiana lawmaker who led the Congressional Black Caucus during the Trump administration, heads Biden’s Office of Public Engagement. There, he’s the counterpart for outside groups and activists ready to hold the president accountable for his pledge to address the nation’s deep-seated racial divisions.

Together with his promise to fight inequality across all policies, Biden campaigned on healing the nation’s political rifts and working across the aisle to restore civility in Washington. But many Republicans have rejected the president’s call to address racial disparities -- and even the notion that institutionalized racism exists -- setting up a potentially persistent conflict for Richmond to negotiate.

“We’re listening to everybody and we’re going to take input, but that doesn’t mean that we’re going to compromise our values,” Richmond said in an interview. “I’ll just give you one old African proverb as a way to think about it: When two elephants fight only the grass suffers. And so we want to make sure that the people are not the grass -- that you have endless fighting and they never get help.”

Biden has staked his presidency on bringing the coronavirus pandemic to heel and reinvigorating the U.S. economy after the crisis dealt a disproportionate blow to minorities.

But aside from immediate relief, civil rights groups demand structural changes that would help address racial economic disparities and rights going forward. That includes passing a new voting rights law to expand ballot access, even as Republican legislatures attempt to enact measures that would tighten rules on voting -- moves that would disproportionately affect minority groups, their advocates say.

“It’s important that President Biden has named racism as one of the crises that he must attack, along with Covid, along with the climate crisis and the economy,” said Judith Browne Dianis, executive director of the Advancement Project National Office, a civil rights group. “And so our task, as the outside groups, is to make sure that they are being real on their commitment.”

As the main conduit between Biden and outside liberal groups pushing to undo former President Donald Trump’s policies and advance a progressive agenda, Richmond will deal with issues ranging from unequal health care to police brutality. Other important administration figures on those issues, Dianis said, include Catherine Lhamon, who’s in charge of racial justice and equity on the Domestic Policy Council; Kristen Clarke, Biden’s nominee for assistant attorney general for the Civil Rights Division; and Vanita Gupta, his nominee as associate attorney general.

“I might be what my dad used to call a jack of all trades, a master of none. In baseball terminology, more of a utility player,” said Richmond, a former college ballplayer who helped Democrats dominate Republicans in their annual charity game.

Biden, Richmond recounted, “said over and over on the campaign trail that he wants to be a very transformational president, that he wants to empower groups that generally were not empowered. And he wants his legacy to be that of the most empowering president to ever govern.”

Biden made significant moves in his first weeks in office, issuing directives to rescind Trump’s ban on diversity training for federal workers, prevent discrimination in housing and end the use of private prisons. The president has infused his pandemic response with measures to address the virus’s out-sized toll on Black and Brown Americans, and has outlined plans to invest $150 billion in minority-owned small businesses and increase spending for Historically Black Colleges and Universities.

Richmond said these early steps are a key signal to the public that Biden’s pledge to work toward equity was serious.

“That is a big deal. That means we are looking for and watching and being intentional about equity throughout government. So that means advertising, procurement, that means education,” Richmond said in an interview. “But even within our Covid package and Covid response, so far we’ve done it through a lens of racial equity, too.”

Richmond, 47, graduated from Morehouse College, a Historically Black College and University in Atlanta, before earning his law degree from Tulane University in New Orleans.

He was first elected to Louisiana’s House of Representatives when he was 26 years old, and served for 11 years before being elected to the U.S. House in 2010. He chaired the Congressional Black Caucus from 2017 to 2019 -- a period characterized by deep racial strife as Trump’s divisive rhetoric helped fuel a resurgence of white supremacism.

Under Richmond’s leadership, the caucus delivered a 125-page report to Trump rebutting his “what have you got to lose?” pitch to Black voters during his 2016 campaign. The report was titled: “We Have a Lot to Lose: Solutions to Advance Black Families in the 21st Century.”

The group champions many of the issues on Biden’s agenda, such as criminal justice reform, eliminating health disparities and addressing the wealth gap. But Richmond can also help Biden reach across the aisle; as a lawmaker, he cultivated relationships with key Republicans including Steve Scalise of Louisiana, the second-ranking GOP member in the House, who calls Richmond a “close friend.”

Republicans have already signaled that an uphill battle awaits Biden’s initiatives on race.

Senate Minority Leader Mitch McConnell refused to allow a floor vote on the voting rights bill when his party controlled the chamber under Trump. Senator Tom Cotton of Arkansas has taken issue with Biden’s plan to end systemic housing discrimination and boost home ownership in communities of color.

“Is it ever appropriate for the government to treat people differently based on their race?” Cotton asked during a confirmation hearing for Marcia Fudge, Biden’s nominee for secretary for Housing and Urban Development.

And Republican Senator Rand Paul said that Biden’s inaugural address, which focused heavily on inequality, amounted to an allegation that Republicans were racist.

But Joe Trippi, a Democratic strategist, said Biden and Richmond may be able to win “surprise” Republican votes on some equity measures. For example, he said former Alabama Senator Doug Jones, whom he previously worked for, cosponsored legislation with Senator Ted Cruz, a Texas Republican, on reviving cold cases from the Civil Rights era.

In Richmond, Biden has “an astute politician” who can manage the challenge, said James Clyburn, the third-ranking Democrat in the House.

Clyburn -- who is largely credited with saving Biden’s faltering campaign when he endorsed him ahead of South Carolina’s Democratic primary -- was instrumental in introducing Biden to Richmond, leading to the prominent White House role. Clyburn is a powerful political figure among Black Americans and civil rights groups and said he expects Richmond to be involved in all major policy discussions at the White House.

“He will make a very effective adviser to the president,” Clyburn said, cautioning Biden to heed Richmond’s counsel. “If he doesn’t, he’ll hear from me.”

Biden has signaled he has no intention of defining Richmond’s role narrowly or limiting him to inequality issues. On Feb. 5, for example, Richmond was part of an Oval Office meeting to discuss the pandemic relief package with House Democrats.

Richmond is “a young man but a seasoned politician,” said Marc Morial, president of the National Urban League and former mayor of New Orleans, who has known Biden’s aide since his political career began two decades ago.

“The president needs him around the table on every big decision.”